Basement Transmissions comes to the rescue amidst library renovations. 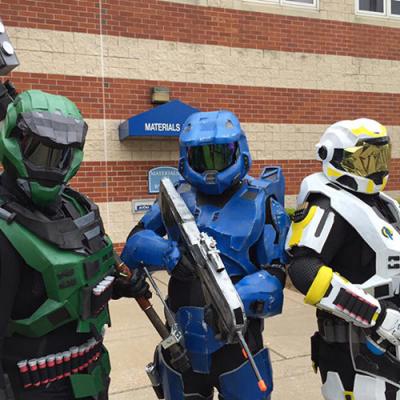 Do you ever wonder what it's like to be a superhero? Spare yourself the freak lab accident and fly down to Erie Library Comic Con. It should fit your inner geek like a 100 percent spandex, full-body glove.

Jean Grey is dating WHO?! She-Hulk wore WHAT?! Bruce Wayne is still single HOW?! Plotlines thicken as comic universes collide in a crossover event for all ages. The Hero Prom invites costumed couples (and eligible bachelors/bachelorettes) from all corners of the cosmos to step out of their interdimensional wormholes and onto the dance floor at Basement Transmissions. Prizes will be awarded for the best dressed, so it's probably wise to leave your Val Kilmer or George Clooney-era Batsuit back at the cave – where their more questionable elements won't stick out.

Basement Transmissions has stepped up and will provide the venue as Blasco regenerates itself. By no means will the Comic Con be stripped of its usual attractions – Geek Erie has done everything in its power to deliver it justice.

The Erie County Public Library and the Comic Con have enjoyed a symbiotic relationship since its inception in 2015, but ongoing renovations to Blasco had organizers seeking a new host this year. As heroes are wont to do, Basement Transmissions has stepped up and will provide the venue as Blasco regenerates itself. By no means will the Comic Con be stripped of its usual attractions – Geek Erie has done everything in its power to deliver it justice.

Aspiring artists, writers, and designers should pencil and/or ink themselves in to the Comic Con's workshop series, a crash course in the basics behind a good book. Comic Books 101 will focus on characters, Comic Books 102 will delve into script, and Comic Books 103 will center on layout. Uncommon Universes Press will offer an additional class for writers in world-building – a compelling setting can add more color than color itself.

At one time an occasional curiosity, the comic book film is now a fixture of the cinema landscape. Unfortunately, directors have not always done as well as their heroic counterparts in differentiating right from wrong. According to the review aggregator website Rotten Tomatoes, Roger Corman's The Fantastic Four got it very, very wrong (91 percent rotten). Erie Movie House will cap off Comic Con with a Doomed double feature: the documentary followed by the ill-fated feature film. Those who show up early will be treated to unlimited arcade, board, and table games, refreshments, and a surprise bonus feature.