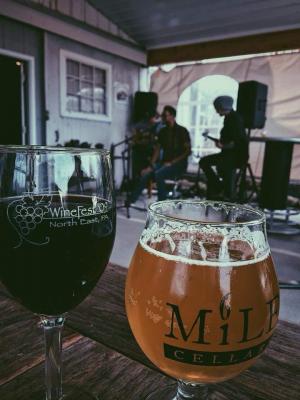 The Andromeda Agency is taking a new approach at 6 Mile Cellars. While most Andromeda Agency events showcase pop-punk/punk rock bands at the Ballet Haus, the upcoming gigs at 6 Mile will feature more indie/instrumental artists. "It attracts a different audience and the outdoor patio/seating keeps with the very relaxed vibe of the winery," says Elvis Maryshine, artist manager and talent buyer at the Andromeda Agency.

The first "Whimsical Wine Wednesday" will kick off with Kansas quartet Mess. The band is no stranger to Erie, previously taking the stage at PACA and The Ballet Haus. This past March, they released their long-awaited EP titled Learning How to Talk. Mess has opened for major acts such as Turnover and Movements. Currently on tour with Mess is Barely Civil. In early 2018, the Wisconsin four-piece released their debut album We Can Live Here Forever through Take This To Heart Records. Local singer-songwriter Jess Royer will open up the show with a special return performance.

The relaxing afternoon concert series "Show Sundays" debuted back in June. The next installment at 6 Mile will feature Ruckzuck, a psychedelic rock trio from North East. They'll be shaking things up with Onewayness, a solo project belonging to Erie's Adam Holquist. An experimental multi-instrumentalist, Holquist's sound is best described as "atmospheric." Pulling the bill together will be Jovial Cacophony, a project by a well-known Erie filmmaker and recent NYU graduate Astro Rhys. Rhys describes the genre as "freak blues" and "a soup with too much sauce."

Show Sundays will keep rolling Aug. 11 with Canadian sibling duo Alone I Walk. They have supported the likes of PVRIS, Silverstein, and Rarity and recently signed to LA label Anchor Eighty Four Records. Winski, a pop-punk band from Buffalo, NY (previously opening for the likes of Red Jumpsuit Apparatus, Secondhand Serenade, and Metro Station) will be performing a rare piano set. Last but not least is solo indie-folk artist Brooke Surgener.

Alternative rock five-piece The Weekend Run Club is kicking the month of August off at the Ballet Haus  (1020 Holland St.) with support from Teamonade. They will be followed by South Florida-based trio Never Loved on Sunday, Aug. 4. On Thursday, Aug. 8 Speed Dial will be returning to the Ballet Haus for the first time since supporting Mom Jeans in April. — Dylan Tutmaher