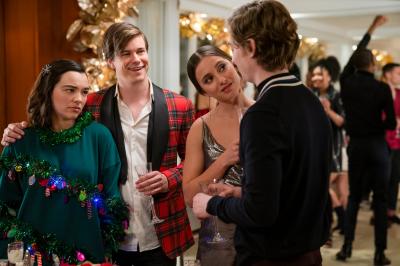 I love Christmas as much — if not more — than the next person, but this year hasn't exactly fostered the holiday cheer I'm used to feeling post-Halloween. Dash & Lily, however, was a complete game-changer that propelled me into the Christmas mood.

Cynical, Christmas-loathing Dash (Austin Abrams of Chemical Hearts, Paper Towns) finds a notebook titled "Do You Dare…?" hidden in the stacks at his favorite bookstore, The Strand, in New York City the week before Christmas. The notebook is left by Christmas-loving Lily (Midori Francis of Good Boys, Ocean's 8) in the hopes of finding someone brave enough to take on the dares. This event kicks off a whirlwind romance between the two, as they exchange not only dares, but also secrets, hopes, and dreams between the notebook's pages.

Lily's dares bring out the best in Dash, showing him that the holiday season can truly be magical, while Dash's dares show Lily that acknowledging and feeling negative emotions instead of hiding them is a necessary part of life. The romance is not without its ups and downs, though. Dash's ex-girlfriend Sofia (Keana Marie) moves back to the city with plans of rekindling their relationship, even though he has drastically changed in the year since she left. Lily's family is stern but loving, requiring her to lie and sneak around to complete some of her dares. Additionally, there are times when it seems Dash and Lily are not who the other thought they were through the pages of the notebook.

With characters having depth and substance that breaks from typical rom-com tropes, Dash & Lily doesn't feel forced as too cheery or too depressing like many holiday-themed shows. Instead, it is the perfect balance between reality and guilty-pleasure Hallmark-esque holiday movies, making it a show perfect for the masses.

Filled with laughter, romance, and a heartbreak or two, Dash & Lily will make even the most Scrooge-like among us crack a smile and believe in the spirit of the holidays, even if only for a moment. — Ally Kutz