Collaborating for the common good might be missing in other areas of American life, but not here. 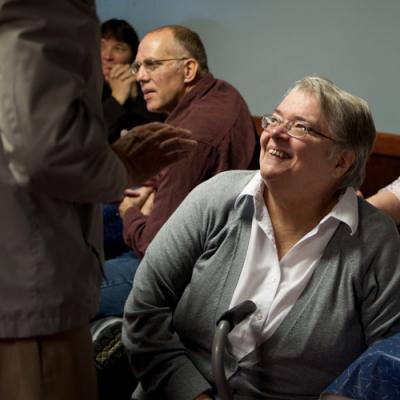 The founder of North East's 4 N.I.N.E. Place works fiercely behind the scenes to build a sense of community. And if there's a battle to be won, she and a corps of 123 dedicated volunteers are already winning it.

Need affordable clothes for your kids? Work shoes that don't cost an arm and a leg? Furniture for a new apartment? A place to prepare for your GED?

Want to learn how to cook on a budget or figure out finances so you can get ahead?

As each problem presents itself, Stetson finds resources to solve it, all without a dime of government assistance. I serve on the board of this non-profit, and my only job is to nod my head "yes" and stay out of the way. We don't get bogged down in meetings. There are no committees. No paid employees. It just works.

Erie's anti-poverty initiatives, Erie School District officials, and for that matter, anyone interested in building a healthy, sustainable community, could benefit from taking a look at 4 N.I.N.E.'s creative approach. The acronym stands for 4 Neighbors in North East, but in a larger sense we're all part of the same neighborhood.

What began 17 years ago as a non-profit thrift store along the railroad tracks at 49 Smedley Street is now channeling funds from donated goods into day care and kindergarten readiness programs, money management education, healthy eating and exercise classes, a community garden, shade trees for public spaces, safety equipment for fire, police and emergency services, and a partnership for jobs skills training.

4 N.I.N.E. also serves as a site for Erie Free Taxes, Al-Anon, GED preparation and testing, and PennDOT's Child Safety Seat distribution. Awhile back, the thrift store gifted some of its property to the North East Food Pantry, and up went a new building across the parking lot. With so many people coming and going, it's easy to understand why the organization opened a separate meeting place nearby at 103 Clay Street in May. Now thrift store volunteers have more breathing room for sorting merchandise, and classes can meet offsite without interruption.

To give you an idea of how indispensable this place has become, when a couple of misguided kids set fire to the thrift store's loading dock in 2012, the townspeople, led by the North East Community Foundation, collected more than $50,000 to help the thrift store rebuild. Two weeks later, the store was up and running in a temporary location. Two months later, the North East Grape Pickers football team was hauling heavy boxes back inside the refurbished building.

Stetson was a teacher in the North East School District for decades. When she noticed some kids weren't showing up for the annual choral concert after singing their hearts out all year, she confronted them. "You mean to tell me you're going to take a bad grade when you've done all this work?" Stetson asked. "That's ridiculous!" Turns out these middle-schoolers had to wear dress shirts and pants, and they didn't have them.

"I envisioned a way to get people the clothing they needed," Stetson said. Even she marvels at how 4 N.I.N.E. Place took off from that one, simple idea and a conversation with a few likeminded friends.

It's not uncommon to find as many as 40 shoppers waiting for the doors to open. Volunteers ring up 600 cash register transactions every day the store is open. Proceeds go right back into the community, completing the circle.

I like to think of the thrift store as the ultimate recycling project. Clothing and household furnishings that would typically be thrown away are left by local residents on the loading dock, sorted and arranged by volunteers, and sold – often within hours of landing on a shelf or rack – at a cost people can afford. It's not uncommon to find as many as 40 shoppers waiting for the doors to open. Volunteers ring up 600 cash register transactions every day the store is open. Proceeds go right back into the community, completing the circle.

The thrift store supports programs for all ages – and right now there's an emphasis on reaching out to seniors, based on a recent community needs survey – but in my opinion one of the best decisions the board ever made was investing some of its proceeds in early childhood education.

There's no question Pennsylvania's system for funding public schools is broken, but until it can be fixed, communities like North East have to find creative ways to patch the holes in their pockets so our kids aren't shortchanged.

"Early childhood education is critical," said Dr. Jenny Ritter, principal of North East's Earle C. Davis Primary School. "All of the research shows that the more we do between preschool and grade two is going to have a huge impact on a child's success. If they're not reading by third grade their likelihood of dropout is higher, and we know where that can lead. What we're trying to do in partnership with 4 N.I.N.E. Place is pile on as much love and support as we can."

Yearly tuition for preschool, which in North East costs between $864 (three days a week) and $1,521 (five days) is out of the question for many families. 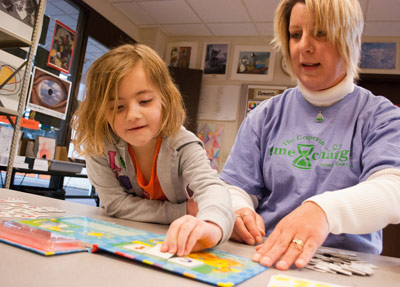 Thanks to the thrift store, incoming kindergarten students who don't have the benefit of preschool or who have trouble recognizing letters and numbers can get up to speed with Summer Superstars, a free program run by experienced teachers at Earle C. Davis Elementary School. Children come every morning, Monday through Thursday, from July 11 through August 5. They're treated to breakfast, lunch, and curriculum-based activities that make learning fun. 4 N.I.N.E picks up the tab for teacher stipends, field trips, supplies, and snacks.

"We want to make winners out of children who otherwise might struggle," Ritter said. "It's not only about academics. It might be about: How do I sit still to hear a story? How do I have a conversation with somebody? How do I walk in a line? How do I use a public restroom? How do I eat in the cafeteria? Over the summer their self-confidence grows and they not only feel good about coming to school, they become leaders."

A similar program, Saturday Superstars, helps children in kindergarten through grade three on Saturday mornings during the school year.

About 60 percent of children in the North East School District qualify for free or reduced lunches, making it an economically disadvantaged school district under the U.S. Department of Education's Title I guidelines.

Challenged with how to bring busy families together to encourage parental involvement, Ritter and Stetson decided to host a free dinner at the school last spring. Title I children, who receive extra help with reading and math, were invited to bring siblings and parents. More than 180 people showed up. After everyone enjoyed a nutritious meal, younger children went off to the school library to play games supervised by volunteers while teachers demonstrated learning activities parents could do at home. Kitty Harrington, a retired librarian, showed parents how to read to their children. She told Ritter most Title I programs she goes to have 18 parents attend, not 180.

No wonder the North East School District topped the Pittsburgh Business Times' statewide Overachiever rankings in 2016 for exceeding expectations on standardized test scores. The percentage of students identified as economically disadvantaged is included in the formula for calculating the ranking.

Recognizing that education at all levels of society is essential to economic well-being, 4 N.I.N.E. and the North East School District last fall entered into a partnership with the Higher-Ed Council of Warren, which makes career-building courses accessible to adults in rural communities at low cost. So far 80 North East residents have enrolled. A list of upcoming classes can be found on 4 N.I.N.E.'s Facebook page. 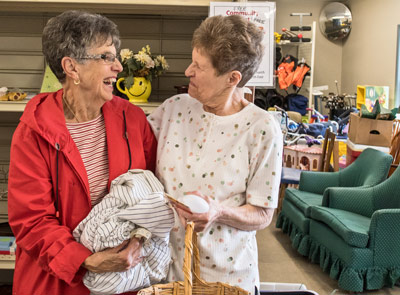 Whether it's the thrift store's efforts, the Law of Attraction, or the simple human kindness that resides within all of us, people in North East seem to be gravitating toward doing good.

"When you build community, everybody benefits," said Stetson, noting that her volunteers, many of whom put in more than 1,000 hours a year, have become like family.

A few weeks ago, some people from Wesleyville visited 4 N.I.N.E. Place to see how they might adapt some of the ideas. Someone suggested opening a coin-operated laundromat that could fund worthwhile programs in their community, too. (Money laundering for a cause – don't you love it?)

She will have my head for writing this, but I couldn't help thinking of Stetson when I read that activist Father Daniel Berrigan, a tenacious Jesuit priest known for his radical ideas, died last April.

"About practically everything in the world, there's nothing you can do. This is Socratic wisdom," Berrigan once said. "However, about a few things you can do something. Do it, with a good heart."

Lisa Gensheimer is a documentary producer and writer. She can be reached at lisa@onmainstreet.com.