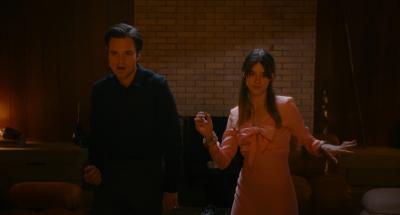 We follow a woman out on a first date. We feel her awkwardness and discomfort as she and her date fail to connect, then her bewilderment as he becomes insulting after she declines a second date. This is the scene that opens Mimi Cave's horror/comedy Fresh and sadly for our heroine, it is the least horrifically uncomfortable experience she has throughout the film. Cave takes us on a tale of modern romance that is gross, darkly funny, and unfortunately, a little too convoluted for its own good.

The film follows Noa (Daisy Edgar-Jones), a lonely young woman unlucky in love. Her spirits are lifted after a chance encounter with Steve (Sebastian Stan), a plastic surgeon who is handsome, charming, and seemingly everything that she is looking for. However, the budding romance hits a bump when Noa is whisked away to a secluded cabin in the woods, where she learns about Steve's unusual … appetites.

I'm trying to keep the plot synopsis as vague as possible as most of the fun is letting the plot unravel into weird and unexpected directions. As a simple horror tale, it works well enough, but sadly the film adds unnecessary subplots throughout, most of which get dropped and thus do nothing more than pad out the bloated runtime. The film feels like it's trying to make some kind of satirical statement about modern dating and/or objectification but there just isn't enough there for any kind of lasting message. Even though the satire doesn't quite work, there are still enough effective gross-out moments to make audiences squirm in their seats. Fresh is now playing exclusively on Hulu.