On the Road with COVID-19 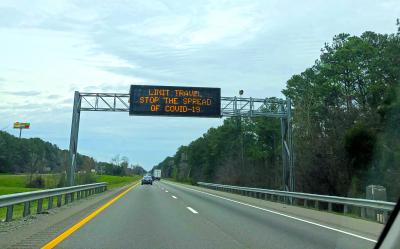 Vacations are fun and carefree. At least they're supposed to be. But an unwelcomed virus tagged along during our recent long-scheduled, carefully-planned getaway to Florida. During its entirety, the threat of the COVID-19 virus sat quietly in the back seat, filing its nails to razor points. We feared it, but could not kick it out to the side of the road.

To be clear, we took the virus very seriously. However, it was only being talked about in remote places when my husband Mike I left Erie on March 12. Mass shutdowns in our area had not begun; "social distancing" had still not entered the lexicon. So, with many pre-paid tickets in hand — including ones for a bucket-list caliber St. Louis Cardinals' spring training game – we hit the road.

As we drove through North Carolina that afternoon, though, the dominos started falling. All spring training games were suspended. Then the NCAA basketball tournament was gone, as were many other mass-crowd events. We slowly watched our vacation dissolve, as the news poured in over our phones. I quipped on Facebook that my spring training game was "coronavirused."

Yes, I cried. I've been wanting to go to spring training since I became a Cardinal fan in 1982. We had been planning this trip since last fall. We bought tickets in January as soon as they went on sale, and started planning our itinerary. For our anniversary, Mike bought me a game-used baseball and some player's cards with the hope I could meet and get an autograph from my favorite Cardinal, Yadier Molina.

When baseball was lost to us, birds still offered some promise. Mike and I are avid birders, keeping a "life list" of all the species we have seen. There were many in Florida we planned to add to this list. After the game, we were to head down the Atlantic coast to the Everglades and back up the Gulf coast looking for a variety of birds that we had painstakingly researched. We were armed with a list of target species and all the locations where they may be found, thanks to a program from Cornell University called eBird, and advice from friends.

When we hit our first Florida location — Jupiter — so many things had changed, but not everything. A planned dinner with relatives still happened in a crowded outdoor restaurant overlooking a marina. They brought the hand sanitizer, everyone was careful. But, yes, we hugged.

As we watched events unfold even farther, we reasoned that the rest of our trip was devoted to birding in mostly isolated locations, so we decided to continue. On the way out of Jupiter we went to Roger Dean Stadium, where we would have been for the game and took our obligatory sad-faced selfies and headed south.

By the time we needed to stop for some groceries before two nights of camping in the Everglades, social distancing was a growing concept. The Winn-Dixie was packed. A local behind me in line replied to my query about the crowd, "No, it's not usually this busy." The toilet paper, hand sanitizer and wipes were gone, but we snagged a two-pack of paper towels. A mild panic rippled through the store as shoppers hastily grabbed things and tried to avoid other people.

We shopped quickly and sanitized ourselves in the car with some wipes we brought with us. We didn't have very many of them. By the end of the trip, we were sharing them to make them last longer.

Camping in the Everglades was a relief after the frenzy of civilization. We were far away from other campers. We walked a two-mile trail never seeing a soul, and at night learned some new constellations. For two days, things felt normal.

The rest of the trip was a disjointed collection of uncertainties juxtaposed with sublime birding and wildlife watching. Breakfast at hotels shrunk from hot buffets, bowls of fresh fruit, and make-your-own waffles to weirdly wrapped food and drink items. Eventually, it became a pre-packed paper bag with a muffin, piece of fruit and a bottle of water. On the other hand, we did see some "life list" birds, along with Florida crocodiles and American alligators.

It became clear that rules in Florida were lax compared with what we were reading on social media from Pennsylvania. Liquor stores remained open just about everywhere we went, and many restaurants were still offering dining room service with spacing restrictions. We had our last dinner out at a small, open-air seafood restaurant where tables were spread way out.

It was clear that Floridians did not want to give up their freedom. After hearing that it was okay to go outside, people did — in droves. At Myakka River State Park, we had to work to keep our distance from large crowds in the more public areas of the park. The beaches were worse, we heard. Florida Governor Ron DeSantis publicly declared he would not order beaches closed statewide, even though the mayors of Fort Lauderdale and Miami Beach had already closed theirs on March 15. Despite the governor's announcement, other counties took action and closure notifications started in earnest. On a drive out to Siesta Key in Sarasota County to "see the Gulf of Mexico," we found the public beach parking lots full, with thousands of people milling about. We left in haste. The county closed them the following day.

In this increasingly topsy-turvy world, rules changed daily, even hourly. At one convenience store, we walked in holding travel mugs which we knew – thanks to the sign on door – we could not use. After reading the sign, we were just going to buy coffee in their cups (touched by how many people?). The eagle-eyed clerk stopped us right inside the door with a stern "You cannot bring those in here!" We left and got some coffee at a drive-thru window. In their cups.

Finding meals led to frustration. Many businesses do not keep their websites up to date, we learned. Websites claimed restaurants were open, but phone calls indicated otherwise. One shining example of hospitality, though, was a small family-owned German restaurant we found while seeking out another. The sign said "open," but the door was locked. A young woman opened it. We asked if we could get something to go, and she invited us in. The chef, her mother, flew to the kitchen to pull together some food for us. We chatted with the daughter, while waiting, who told us they just came to the U.S. two years ago. Soon, we were laden with copious amounts of delicious sauerbraten, spaetzle, and red cabbage. It was a very bright spot in a world growing darker and more unfriendly.

We were also met with unexpected difficulties. A simple trip over the Sanibel Causeway turned into a hurdle when a temporary sign flashed a warning that after a certain date, no cash tolls would be accepted and only pre-paid passes would be. With no pass, what to do? After some research and making more phone calls from the side of the road, we were reassured by a county clerk that the system would capture our license plate and send us a bill. So, now at home, we await a bill for six dollars.

Those kinds of frustrations and uncertainties crept in often, but humor saved us many times. The spare bag of croutons we got with a salad early on became one of many jokes along the way. They became the "emergi-croutons," should we be starving.

Other small things kept us amused, too. At our first hotel of the trip, the room had that extra roll of toilet paper one often finds. Mike photographed it and posted to Facebook, saying "we know we've made it to the big leagues when our birding trip includes staying at a hotel that offers THIS amenity." By the end of the trip that extra roll was absent from every hotel, and most of the time we had to be mindful of how much we used to ensure we'd have enough until we checked out. I am proud to report we did not steal any.

By the time we headed north, everything felt surreal. The carefree sense of "being on vacation" that had already started to fade was now almost gone as we tried to manage the logistics of being away from typical resources. The in-car humor grew darker but we laughed anyway. Flashing road signs scolded us as we drove through landscapes that went from lush to spring-like and back to winter: "Limit Travel. Stop the Spread of COVID-19." "Stay Home, Practice Social Distancing." Home was starting to look very good.

Even now, as this is being written on March 30, Florida has not been completely shut down by Governor DeSantis. A petition is circulating on change.org asking the governor to "Shutdown Florida." It has nearly 390,000 signatures and that number is growing rapidly.

Which has given us one more emotion to grapple with: guilt. Were we foolish for having gone? Are we carriers who have passed COVID-19 on unknowingly? It's been more than a week since our return. We have sequestered ourselves, with a couple of trips to the grocery store done quickly and safely (we hope). We're just fine, but every cough is suspect.

In case anyone is wondering, Mike saw 13 new bird species and I saw nine. We were very happy with that. The trip was not the dream vacation we thought we were going to have, but it certainly will go down in the books as one of the most interesting.

Mary Birdsong can be reached @mbirdsong@eriereader.com