On the Rocks: Downhill is an Unnecessary Remake 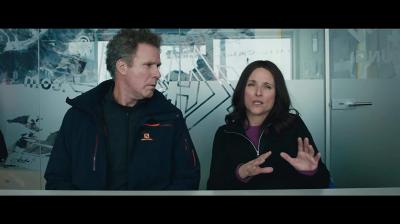 At this year's Golden Globes, Bong Joon-ho famously said that "once you overcome the 1-inch barrier of subtitles, you will be introduced to so many more amazing films." How coincidental that a month later we get Downhill, a perfectly serviceable but wholly unnecessary American re-telling of an already charming and completely accessible Danish film. It seems that 1-inch barrier was just too steep to climb.

Following a family ski trip in Austria, a couple's relationship is put to the test when a controlled avalanche gets a little too close for comfort. When husband Pete (Will Ferrell) gets up and runs away, leaving his wife Billie (a surprisingly fantastic Julia Louis-Dreyfus) alone with their two sons, he finds his family angry and resentful at his impulsive decision. For the rest of the trip, Billie and Pete must deal with the disarray that this action has left them in, as well as the future of their marriage.

Like Force Majeure (the film on which it is based) this film is a tragi-comic look at marriage dynamics and gender roles as well as a statement about how sometimes vacations can be more stressful than day-to-day life. However, Downhill is much broader in its presentation of these themes, rendering them in a much more basic American comedy style rather than the slice-of-life approach of its predecessor. For the most part, the film is charming and watchable, but that's damning praise when there is a much better version of the story already. Just don't be afraid of subtitles. — Forest Taylor