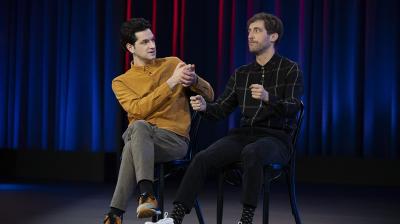 Thomas Middleditch and Ben Schwartz have had many roles in both television and film, collaborating closely with writers to bring viewers memorable characters like Jean-Ralphio in Parks and Recreation and Richard Hendricks in Silicon Valley. Part of what makes them both so talented is their gift for improvisation, their ability to think on the spot and add their own flair to the personalities they play. This back-pocket skill is featured front and center in the duo's new series of Netflix improv specials, Middleditch & Schwartz. In each of the three episodes, the men take a prompt from an audience member about an event that they are either looking forward to or dreading. Once they get a few details about that individual's situation, the result is hysterical 45-minute one-act segments, complete with defined characters and a developed plot made up on the fly.

Long-form improv has been notoriously difficult to film throughout its history, from Del Close to the Upright Citizens Brigade (UCB) Theatres, and has rarely translated aside from a few televised specials of UCB's long-running show ASSSSCAT. Part of what makes this format work (and these specials oh so hilarious), is Middleditch and Schwartz' focus on different details in telling the story, making them a dynamite improv team. Middleditch is a chameleon who can create a number of characters, each with their own voice, motivation, and mannerisms. Schwartz is adept at setting a scene down to the most minute details and moving the plot forward. This combined with their impeccable timing make for a laugh riot in each scenario; a wedding officiated by a ghost, a class of law students surrounded by secret doors, and a coming-of-age story about two wannabe comedic photographers. Middleditch & Schwartz is a side-splitting piece of theatrical genius, and well worth several watches. — Claudia Rose