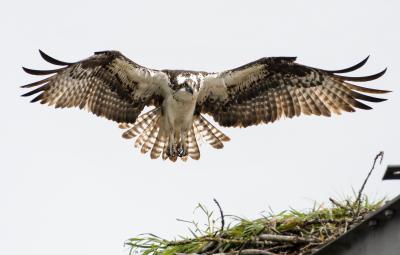 My wife Mary Ann and I go to Presque Isle almost every day. During the spring, one of our favorite "missions" is spotting migrating shorebirds. And of all our favorites, the osprey may rank first.

Ospreys are large birds, almost as big as an eagle, and such adept fishermen that they have been nicknamed "fish hawks." Mature osprey are two feet tall with a wingspan of six feet, making them almost the largest raptor to visit Presque Isle. Their talons are specially equipped to grip the fish that they catch and their nostrils automatically close when they strike the water.

Presque Isle's osprey do not breed or live here year-round. They are spring and fall visitors, stopping to re-charge on migrations to or from the South. We often see the visiting osprey at Waterworks perched in the trees that surround the two settling ponds, which were originally constructed as a part of the city's water supply system.

On Sunday, March 29 we drove past Waterworks, wondering if we would see an osprey, but we did not. Instead, we were treated to the sight of Pennsylvania Fish and Game Commission tanker trucks parked at the edge of the ponds and releasing thousands of gallons of water with adult trout. This spectacle always draws a crowd, and we stopped to watch. It is great fun to see the fish pouring into their new Waterworks home. Delighted children watching the release make the annual event even more exciting.

The event reminded me of local fish hatchery fish history. During the late-1800s and early-1900s, when several of Lake Erie's most desired species were fished to near-extinction, there was hope that federal hatcheries in both the United States and Canada could restore whitefish, herring, and salmon (in Canada) to earlier levels. What was obviously needed at the time was commercial fishing restrictions, particularly with respect to fish that were being slaughtered as they were spawning. But regulating (limiting) commercial fishermen would have been politically unpopular and could have been interpreted as a threat to the economies of several Lake Erie regions, including Erie, which was the "Fresh Water Fishing Capital of the World."

At the time, Erie boasted more than 100 local fish tugs in the harbor and 16 regional processing houses. Federal hatchery programs failed. Not only were the stocked hatchery fish unable to add to or augment the biomass of whitefish, herring, or salmon, but biological research of the era suggested that when introduced to the lake they somehow managed to weaken the native species. In response to this research both the United States and Canadian governments abruptly ended their hatchery programs.

The Commonwealth of Pennsylvania quickly moved into the vacuum created by the sudden end of federal government hatcheries, arguing that fishing was so critical to the Erie economy that "something had to be done." But after a few decades of attempting to raise whitefish, herring, yellow pike, and blue pike at local hatcheries, as well as an ill-advised venture during which they tried to convert the Presque Isle lagoons into an outdoor fish breeding center, they gradually shifted to a more comprehensive and scientifically based stocking program. As their focus shifted away from Lake Erie, they began to include dozens of species, including traditional stream trout.

Today, the Fish and Boat Commission releases a variety of fish species in various life stages, ranging from fry, to fingerlings, yearlings, and adults. In 2019, for example, they released 53 million fish during year-round stocking programs into more than 800 rivers, lakes, and streams. In addition to raising and releasing fish, they are actively involved in rehabilitating waterways and designing fish releases for sites that will use the new fish to encourage a return to native environments. Their Lake Erie steelhead program has been an acclaimed force in stimulating sports fishing. Their programs also include cooperative stocking with Erie's SONS organization (Save Our Native Species) that operates its own hatchery on the bayfront in a building adjacent to the Water Authority. Former hatchery fish, which were reputed to be notoriously "stupid" and unable to compete in complicated natural environments after being fed a diet of unnatural foods, have improved significantly thanks to sophisticated research programs and planning. 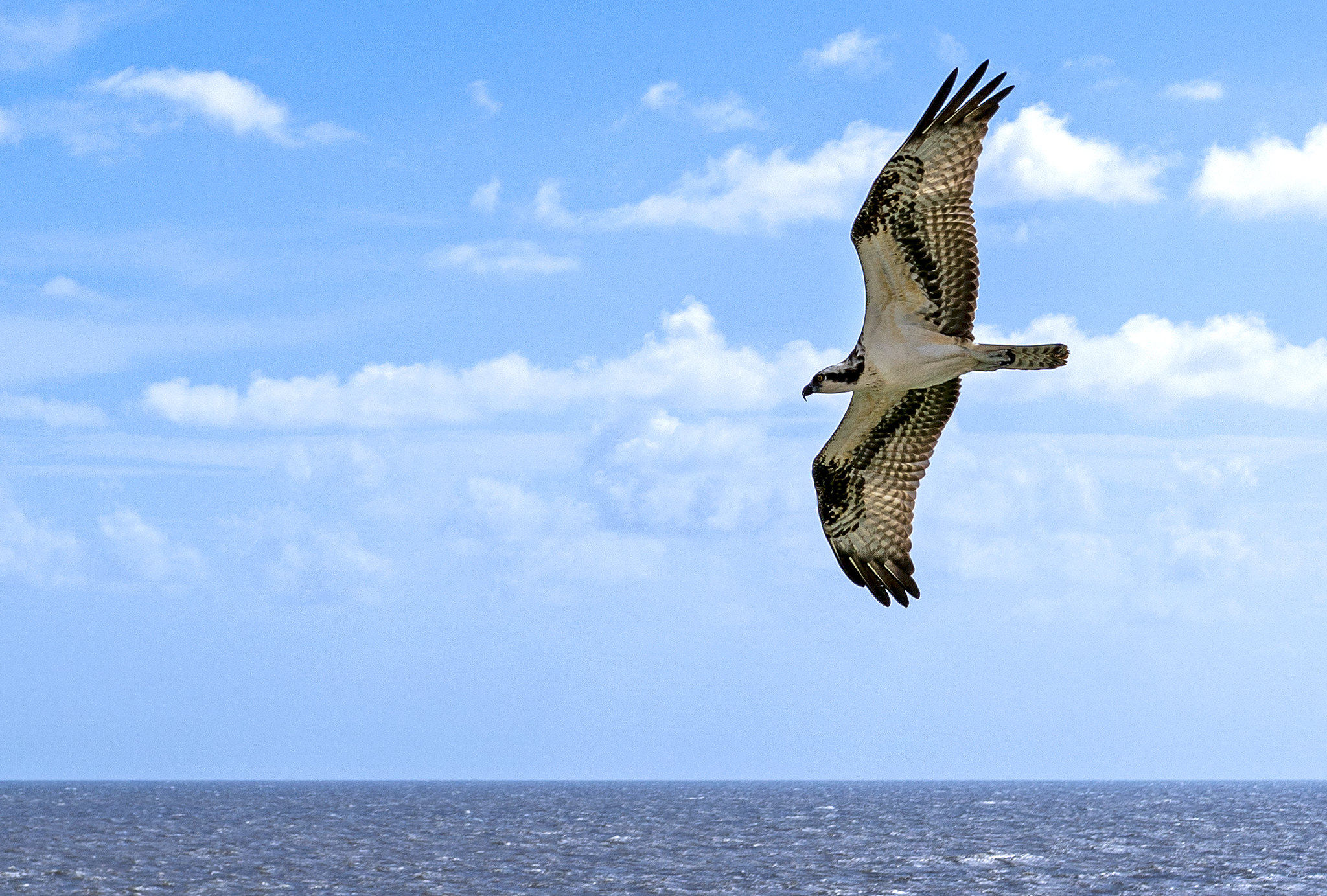 One day later, on Monday, March 30, our expedition to Presque Isle revealed a half dozen cars parked along the road next to the Waterworks ponds with enthusiastic photographers, aiming huge telephoto camera lenses toward the surrounding trees. We pulled off the road and followed the direction of the cameras toward the trees where we spotted an osprey. He was in a tree, poised for a dive into the pond full of less-than-wary trout, which had only been there for a day, learning how things worked in their new non-hatchery home. I'm not sure of the typical success ratio of osprey dives to actual fish catches, but I'm pretty confident that he was "cleaning up."

There were several catches as we watched and some big excitement. Eventually we moved on, and as we continued our drive, the relationship between trout stocking and the arrival of the osprey began to be apparent. It dawned on us that this had happened several years in a row. The Pennsylvania Fish and Boat Commission fills the pond with trout in anticipation of the opening of trout season. A day or two later the osprey arrives. Much too predictable to be a statistical coincidence.

Mulling over the events of the day (I am an academic), I recalled my attempts to read and understand Chaos Theory, a highly mathematical biological treatise from the 1980s. Chaos Theory suggests that the Earth is a living organism with feelings. To oversimplify, the Earth recognizes irritating disturbances on her surface and does whatever she can to purify itself. One charismatic lecturer some years ago used the analogy of a dog scratching at a flea. Among the most irritating disturbances, according to Chaos theorists, is human over-population. And the theorists who follow that line of thinking point to seemingly natural phenomena such as earthquakes, hurricanes, and diseases as the Earth's way of ridding itself of annoying and unwanted human populations.

There are those who would suggest that modern events such as the current coronavirus pandemic may be examples of this phenomena. This explanation would be reinforced by observations of the past few weeks in which climate scientists have noted that air pollution is dissipating and seismologists have added that noise pollution has decreased markedly.

Could the Earth really be doing this? Is Mother Earth an autonomous sentient being, trying to relieve herself of an annoying human problem?

Consider the recent work of forestry biologist, Peter Wohlleben, who has written a New York Times bestseller titled The Hidden World of Trees. His research suggests that trees, the largest and oldest beings on the planet, are much more than sticks of wood, adorning forests and city neighborhoods. According to Wohlleben they are feeling, thinking, compassionate beings, which live in communities and feel things. Trees are social beings who sense each other's presence through massive root structures. They do what they can to support each other and look after their descendants when the seeds that they distribute root into baby trees and grow.

Crazy? Perhaps in traditional or archaic ways of Western thinking, but perhaps not. For a different psychological perspective, read the Buddhist thinking of the Dalai Lama Regarding nature.

Back to the osprey. If all creatures are interdependent, the Earth feels and reacts, trees are social beings, and birds are connected to all of us, is it beyond comprehension that the osprey knows exactly when to stop at Waterworks on his seasonal migration? Possibly not.

Dr. David Frew, a prolific writer, author, and speaker, grew up on Erie's lower west side as a proud "Bay Rat," joining neighborhood kids playing and marauding along the west bayfront. He has written for years about his beloved Presque Isle and his adventures on the Great Lakes. In a new series of articles for the Jefferson, the retired professor takes note of life in and around the water.

Historian and author David Frew, Ph.D., is an emeritus professor at Gannon University, where he held a variety of administrative positions during a 33-year career. He is also emeritus director of the Erie County Historical Society/Hagen History Center and is president of his own management consulting business. Frew has written or co-written 35 books and more than 100 articles, cases, and papers.