On the Waterfront: Searching for Loons

One of Lake Erie's Most Beautiful Birds 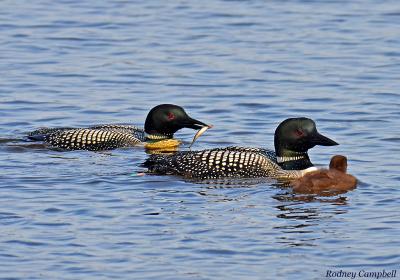 My love affair with loons began 25 years ago when I sailed to the Georgian Bay from Erie. The voyage is a challenging upwind and up current slog that involves tacking up Lake Erie and into the Detroit River, grinding up that river against a fierce current and ascending the St. Clair River before transiting Lake Huron.

When we finally reached Killarney, Ontario after six days of continuous sailing (with one overnight at a yacht club), I was shocked to find that we were berthed at a local marina next to a boat that was exactly the same as my own Nonsuch 30. The cheerful owner, a man named Dan Gibson, invited us aboard for drinks the first night and began showing us his boat. As we inspected the engine he complained that he was having a difficult time getting anyone to change his diesel engine oil because there were so few mechanics in the Georgian Bay area. I showed him how easy it was to change the oil using a dealer-provided oil sump drain hose that he had not noticed at the back of the engine. He was so appreciative that we became instant friends.

Dan told us that he was a professor at the University of Toronto but that he made most of his income by recording sounds in the Georgian Bay. He used sophisticated equipment to record birds, waves, wind, and other natural sounds, and then mixed them with classical music. The remoteness of the Georgian Bay made it possible to record without the ambient noise interference present in most settings.

Gibson marketed his recordings under the Solitudes label and sold them in retail outlets, using a large display machine that allowed potential buyers to test the sounds before making a purchase. Most of his outlets were in state parks and highway rest stops. He extracted a CD entitled "Listen to the Loons" and gave it to me. The CD that featured a beautiful picture of a loon became a personal favorite; one that I played so repeatedly that it drove my wife Mary Ann crazy. More importantly, that meeting with Dan Gibson and gift CD started my loon watching.

During our time in Killarney I would hear unmistakable loon calls that I recognized from the Solitudes CD and that would send me hunting through back bays and inlets until I spotted one. Since I was in their breeding grounds, loons were nurturing babies, a special treat. Prior to that time I had never seen a loon but since then, and on subsequent Georgian Bay visits, I have never failed to find them. The Common Loon is an enormous bird, about the size of a Canada goose. Adult males can be 32 inches in length, weigh more than 10 pounds, and have a wingspan of almost 5 feet. Their body-mass makes them ride low in the water and appear smaller than they really are. Loons are adept fishermen, diving to extreme depths and feeding almost exclusively on fish. Their signature black and white checkered plumage is unique, making them easy to identify.

Fifteen years ago, I was standing on the east wall of the Erie Yacht Club when I saw a loon diving for fish. It was the first loon I had seen in this area. I immediately drove up the hill to fetch Dr. Ken Anderson, a Gannon University colleague and bird expert. Ken reluctantly joined me, explaining that loons did not ever come here. Fortunately, and unlike most such experiences for me, the loon was still there. Ken was stunned to see it. Since that time, the number of loons visiting Erie each summer and spring on migrations to and from Northern Ontario has been increasing. Last year Mary Ann and I counted more than a dozen one fall morning. Their extreme weight and low swimming profile make landings and takeoffs more than interesting. A few years ago, a loon stopped at Presque Isle where he took up residence in one of the Waterworks settling ponds. The longer he stayed the more local bird lovers began to worry that he would be stuck in the settling pond, indefinitely.

The concern was that the relatively small pond did not offer enough "runway" length for him to take off and that he might be trapped there for the winter. Just when the bird lovers were beginning to concoct a plan to trap and release him in the open waters of the bay the weather must have been "just right" one evening and he disappeared.

Since my love affair with loons began decades ago, Canada abandoned its one-dollar bill and replaced it with a coin. The signature image on the face of the Canadian one-dollar coin is a common loon and Canadians have nicknamed it the "loony." Also, since that time, Dan Gibson passed way, but his signature recordings, including my favorite, "Listen to the Loons," are still available online. These days loons can be spotted in Presque Isle Bay, mostly on the protected west end, where they can easily be seen from Presque Isle.

Dr. David Frew, a prolific writer, author, and speaker, grew up on Erie's lower west side as a proud "Bay Rat," joining neighborhood kids playing and marauding along the west bayfront. He has written for years about his beloved Presque Isle and his adventures on the Great Lakes. In a new series of articles for the Jefferson, the retired professor takes note of life in and around the water. Jefferson Quick, Timely Reads

ABOUT THE AUTHOR Historian and author David Frew, Ph.D., is an emeritus professor at Gannon University, where he held a variety of administrative positions during a 33-year career. He is also emeritus director of the Erie County Historical Society/Hagen History Center and is president of his own management consulting business. Frew has written or co-written 35 books and more than 100 articles, cases, and papers.