One on One with Jim Gaffigan

Bacon, Hot Pockets, and bologna, and many other important topics. 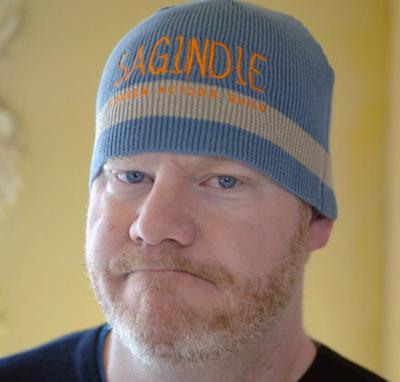 The moment I found out I would be interviewing my most beloved and favorite comedian ever—Jim Gaffigan—I did what any completely rational person would do: I posted it on Facebook…and Twitter…sent out a mass text…made a few phone calls…and sent out a few—20—emails.

A bit maniacal perhaps? Not for this girl. There are few people in this world that I truly love (on a famous superficial level, of course), and Gaffigan is one of them. The day tickets went on sale for his Erie show, the website to purchase tickets of course crashed, and I sat on the phone for over an hour waiting to only be accidentally charged three times—for 28 tickets—and ultimately overdrawing my checking account.

But it was so worth it. Especially now that I had the opportunity to interview him. Best part? Although previous interviews I have had from high profile individuals have been patched through by a manager or blocked, I believe this guy called me from his own number. So, when the 212 area code showed up on my phone, and he was directly on the other end of the line, I knew it was meant to be….probably harassment charges on my end sometime in the near future.

RS: So, you just taped your most recent special, "Jim Gaffigan: Mr. Universe" in Washington, D.C. Tell me about it.

JG: It was very exciting—and a little terrifying. The show will only be available for download starting April 18, which is a little intimidating. But it's only $5 and a dollar from each download will go directly to The Bob Woodruff Foundation, a charity dedicated to serving injured Veterans and their families. And it's roughly the price of five packs of Ramen Noodles. And believe me, my special is going to be much better than five packs of disgusting Ramen Noodles. Gross.

RS: How do you think the performance went?

JG: I think it went great, though the entire standup routine is a bit weird. It was the fourth special I've taped, and this time I wrote everything with my wife. So, this one, our partnership really blossomed…into incredible…codependent…work. But when you tape a live show, there's so many elements you can't control. While you need to adjust to what the audience responds to, you also know there's material you need to get in there. It's always interesting to see how it plays out.

RS: And while we're on the subject, you've titled your new show "Mr. Universe." Any reason behind the name?

JG: It was actually inspired by a joke that I don't even think made it into the special. There's no real specific reason behind it—trust me my narcissism hasn't reached that level. I mean, it's relatively absurd I suppose…I mean, body builders attach their name to this stuff. Weird.

RS: I know you were in Erie at Penn State Behrend back in 2007. Have you been here since, or do you even remember being here?

JG: Oh yeah, Erie is on one of the Great Lakes and I grew up on a Great Lake—and, that's me now totally rationalizing that I'm actually from Erie. Anyhow, I do remember it being an amazing show, and I know you guys have a comedy club—Erie is a great place to do a show, and it's great for up-and-coming comedians. Plus, I remember it being much like my hometown. Erie is a working-class, Catholic, Eastern European city from what I can recall.

RS: Agreed. So, let's talk about religion for a second. Are you Catholic?

JG: I am. Though I don't really practice much, and I didn't give up anything for lent. Though I can tell you I'm Catholic enough to understand why Catholics love Rick Santorum.

RS: Really? Because I'm Catholic and I don't understand Rick Santorum—at all.

JG: Okay, well, if you really want to talk religion and politics…off the record...?

RS: So, when did you realize you were funny?

JG: I think I was a class clown. I grew up in a big family, or as I like to call it: chaos. There were six kids. I really was voted funniest guy in high school. I didn't really have an expectation that I would be doing this for a living though. I love making people laugh, though I really think I got into it just so I could add an adjective before "pale." So, now I'm that funny, pale guy. I was raised to go to college and seek out a secure occupation. After I started my career in finance and realized I wasn't loving what I was doing, I decided to try standup. I took a relatively cautious approach though and kept my day job for a long time.

JG: So, I see here that you ran for County Council, tell me about that.

JG: Oh, I just like to Google the people I talk to on the phone.

RS: My editor wants to know what it was like to do the "meow scene" in "Super Troopers?"

JG: Yeah, I probably worked on that project for like two hours and that's what anyone who has ever smoked pot a day in their life remembers. I can work on something for weeks or months and people remember me as the "meow guy."

RS: Next brilliant question from a friend of mine originally from Chicago; he wants to know if you know what a pepperoni ball is?

RS: It's an Erie thing, and he's from Chicago and he had never heard of one before moving here so he wanted to know if you had I guess.

JG: Oh, I was terrified it was actually a Chicago thing I never heard of! Now that it's an Erie thing—no, what are they? I'm guessing it's bread with cheese and pepperoni in it? And are these pepperoni balls Italian or just profoundly white trash brilliant food products?

Jim Gaffigan will perform in Erie next Thursday, March 15 at the Warner Theatre. Showtime is 7 p.m. and tickets are still (unbelievably) available. Call 452.4857