Open Land in the Plans 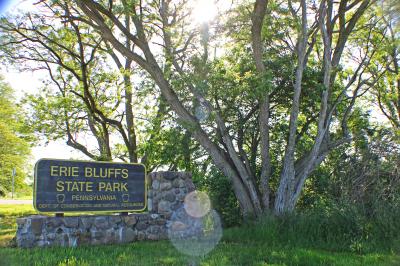 In 2005, the Lake Erie Region Conservancy achieved the singular thing it had set out to do: Protect a stretch of land spanning Girard and Springfield townships. But Tom Fuhrman — who became LERC's executive director when it formalized as a nonprofit in 2000 and still serves as its director today — had been working on that case for nearly 20 years already.

Back in 1981, a young Fuhrman was standing in front of a polling station in Lake City. He had just returned to the Erie area and wanted to get involved in politics. While he was volunteering for another campaign — a way his father had suggested he get involved in the Erie political scene — he had a spur-of-the-moment idea: Launch a write-in campaign for mayor in the small municipality. He had a personal motivation and reason to believe he could more easily achieve his goal through elected office.

"Our family's property was between that and Erie Bluffs," Fuhrman says. "And I committed to prevent that happening at the Bluffs."

The first "that" Fuhman's referring to was what had been Camp Sequoia Boy Scout Camp. Fuhrman's family owned property between the Bluffs — that plot of land in Girard and Springfield townships — and the camp, which had been sold off to developers. Up sprung McMansions — the second "that" Fuhrman mentions.

The future of the bluffs was unclear.

So on the spot, freshly back in Erie County, he decided to run for Lake City mayor, writing his name on tiny pieces of paper that he would hand out to those heading in to cast a ballot. And it worked; he got enough votes to get on the ballot for the general election come November. And in November, he won.

Nearly two-and-a-half decades later, Fuhrman, who said he never saw himself as a life-long politician, served as a one-term mayor of the small enclave in west Erie County but would see the fruits of his chief labor pay off by way of the Erie Bluffs State Park.

"Our part in the creation of Erie Bluffs State Park still remains our most significant accomplishment," says David Skellie, president of LERC's 14-member Board of Directors, a role he's held for more than 10 years now.

Over the years, Fuhrman had met with several Pennsylvania governors before finally making some headway in turning the state's attention to the 587-acre plot of land, thus begetting LERC.

"We got the attention of Gov. (Ed) Rendell (2003-2011) who saw the value in saving the land and making it a state park," Fuhrman says. "When the deal was done in 2005, we realized the opportunities that existed and the need to continue protecting open space in the Lake Erie watershed."

"The mission of LERC is to identify, conserve, and protect the Lake Erie region's unique natural and cultural resources," Skellie says. "We also promote sustainable development through research and outreach. This original mission has not changed."

That mission has continued because the nonprofit land trust indeed did not stop at the Bluffs. Nineteen years later, the land trust conservancy, which began with zero acres, has been involved in 49 conservation projects, "totaling 1,754 acres having a value of $13,333,314," according to Skellie, who is also a coastal land use and economic specialist for the Pennsylvania Sea Grant Program.

Most recently, LERC, with the assistance of the Pennsylvania Sea Grant, has secured funding from the Pennsylvania Fish and Boat Commission (PFBC), Pennsylvania Department of Conservation and Natural Resources (DCNR), and the Erie Insurance Giving Network, totaling $1,031,721 to acquire 182.1 acres of land and purchase a conservation easement on the additional 88.54 acres, both within the Elk Creek watershed, according to Skellie.

"The completion of these two purchases will protect and provide public access to 270.14 acres having [roughly] 6,325 linear feet of Elk Creek in perpetuity," he notes.

The land is on privately-owned property in an area familiar to LERC: Girard Township.

The easement is on a portion of the Erie County Historical Society's property on Walnut Street/Tanner Road in Girard.

Closings on these properties, according to Skellie, is anticipated later this year.

Additionally with the assistance of PA Sea Grant, LERC is collaborating with the McKean Township Board of Supervisors to improve 88 acres containing roughly three-quarters of a mile of Elk Creek.

"On these Township and LERC-owned adjoining properties, this partnership has been able to obtain $364,394 in funding from PFBC, DCNR, Erie County, and McKean Township to develop a new recreational area on Peffer Road just south of West Road," Skellie notes.

Those improvements include a picnic shelter, trails, an ADA-accessible fishing platform, and parking, according to Skellie, who notes that the project is currently under design with construction expected to begin during summer 2020.

The question Fuhrman says is most important to ask when considering LERC's work and land conservation on the whole is: Why is it important to protect open spaces?

While myriad answers may spring to mind, Skellie makes a blunt point: "No one is making more land."

And, conversely, he notes: "Land continues to be developed."

"The goal is simple," Fuhrman says: "Protect as much open space as we can."

"We want to ensure that open, green space exists for continued wildlife habitat, protected water quality, and for people who want to enjoy natural areas," Skellie says of LERC's mission.

As LERC continues to expand the acreage of impact, Pat Traphagen, treasurer of LERC since 2005, says he looks forward to the organization being "more widely recognized as the go-to regional land trust of the Erie area."

"With the development that has occurred over the years, we are best positioned to take on smaller and mid-size properties that are more common to the area and that may not appeal to bigger statewide conservancies," he adds.

That recognition comes with interaction with the lands LERC conserved and projects they've initiated and completed, Traphagen acknowledges.

"Conserved lands create an enhanced quality of life for our community," he says. "And LERC is proud to play a significant part in the stewardship of these lands."

From the New York state line to the Ohio border — thanks to LERC — these lands are being conserved for you and me.