Music that provided relief when it was sorely needed 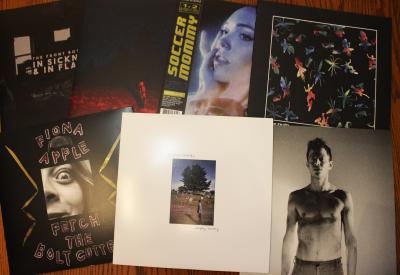 Nick Warren
This year offered an outstanding array of musical releases, with some helping us escape the harshness of reality and others boldly confronting it.

It seems like each December, we arrive at the end of the year in awe of everything that's led us here. Of course, it's no secret that this year has been particularly grueling for a number of reasons (one in particular), but all of that time inside with this music only makes the songs and albums that stuck with us even stronger. Consisting not only of the music that felt important and timely but of the records we simply couldn't put down, we invite our readers to join us in celebrating and hopefully discovering some of the best albums 2020 had to offer.

In 2019, we lost David Berman. This may seem unrelated to Empty Country, the first album from Cymbals Eat Guitars frontman Joseph D'Agostino under the same pseudonym, but in a revealing interview from this year, the singer-songwriter mentioned that he and Berman were close — so close, in fact, that Berman was one of the first people to give D'Agostino feedback on the project. The two were even slated to tour together until Berman's passing due to treatment-resistant depression, an event that impacted D'Agostino deeply.

Berman would be proud of what Empty Country has become, as D'Agostino carries a similar penchant for descriptive storytelling, often blunt but always filled with distinct verbiage. His choice to distance himself from the synth-stained fuzz of CEG in favor of an organic Americana vibe only helps accentuate his characters. Take "Marian," which tells not only the story of D'Agostino's grandmother's death by a drunk driver in 1983 but also a clairvoyant who foresees their own death in 1967. In "Becca," the song's titular character painstakingly crafts and hands out faulty eclipse glasses. It's hard to say why the most captivating songwriting is often the darkest, but as a prisoner pines on closing track "SWIM," "We're evil, baby/Sorry, I guess some people have to be." — AM

On its surface, How I'm Feeling Now is one of the best modern pop albums of the last decade. The latest work of Charlotte Emma Aitchison — better known as Charli XCX — is easily her strongest record to date, which is an impressive feat unto itself, coming just eight months after 2019's much-lauded Charli. The genesis of this work gives it even more relevance and import as it was made in collaboration with her fans over a six-week period during the pandemic lockdown. Released on May 15, Aitchison used only tools at her immediate disposal to craft everything from the artwork to the tracklisting, utilizing feedback from her fans. What she made was something bursting with pop hooks and moving synthesizer work, her vocals at times used as soft delays and powerful vocoded choruses. You'll be hard-pressed to find more earworms in a single effort, its catchiness only rivaled by its creativity. Perhaps the single greatest example of a "quarantine album," it transcends its context to become a nearly perfect release altogether. — NW

3. The Front Bottoms // In Sickness and In Flames

These days, no one does what Front Bottoms frontman Brian Sella does nearly as well. The verbose, unrelenting lyrics he is known for are back at peak form on this, the band's seventh full-length album. While his contemporaries like the Mountain Goats and AJJ release relatively forgettable efforts, Sella returns to what made things like Talon of the Hawk so brilliant. Happily learning every word to this release, listeners will relish singing along to them with heartfelt clarity (which prompted me to revisit the band's full catalog with gusto). Aging punks and younger millennials will find solace in Sella's manic delivery and unforgettable tracks. — NW

For many, Phoebe Bridgers' Punisher will be the album that defines 2020, and it's not difficult to hear why. The 26-year-old singer-songwriter's second affair is gloomy and cinematic, making the small stuff (night walks, recurring dreams, and getting stoned in your bedroom) seem just as dramatic as, well, the apocalypse itself. And the apocalypse does in fact seem to get its own moment on the record, on closing track and song of the year contender "I Know the End."

"Over the coast, everyone's convinced/It's a government drone or an alien spaceship/Either way, we're not alone," she sings against a grandiose string and horn section that would make Sufjan Stevens blush. — AM

Beautifully heavy and emotionally heart-wrenching, Set My Heart On Fire immediately is a triumph of an album — perhaps the best yet from Michael Alden Hadreas, the Iowa-born musician and current Seattle resident. Following watershed albums like 2014's Too Bright and 2017's No Shape, this record is also Hadreas' heaviest yet, with its fuzzy and echoing tones providing a captivating backdrop to his deservedly acclaimed lyricism. With cuts harkening back to '80s shoegaze and avant-garde baroque pop alike, Hadreas has carved out a timeless classic in its 50-minute running time — one that goes by like nothing, marked by moments of gorgeous subtlety and epic grandeur. — NW

If Fetch the Bolt Cutters was the soundtrack to April, RTJ4 was the soundtrack to June. Released during the height of the Black Lives Matter protests, this album coalesced feelings of righteous anger and politically motivated activism for countless listeners. Producer El-P and emcee Killer Mike dropped their fourth studio album at just the right time, and it left an indelible impression on its listeners. The duo's impeccable output was further heightened thanks to this nearly-perfect offering. This 11-track record featured guests like Zack De La Rocha, 2 Chainz, and Mavis Staples in fiery cuts of passion that just begged to be blasted from your speakers. — NW

Making a bid for the year's most understated album, Slow Pulp operates much like tourmate Alex G. Immediacy may not be one of their strong suits, but crafting a mood that sets the stage for their listeners is. Moveys, the debut album from the Wisconsin-based indie-rockers, feels light and heavy all at once, detailing the simple day to day struggle of staying optimistic and upholding relationships against airy acoustic arrangements that feel specifically designed to soundtrack a fall spent indoors. Similar to Phoebe Bridgers, Slow Pulp excel at creating a rewarding listen with hooks sturdy enough to last. — AM

Some artists are lauded for their commitment to change — it's thrilling, for example, to hear Radiohead reinvent themselves every five years — but Hum is not one of those artists. And just like their alternative metal peers in Deftones, Hum released an album this year that doubled down on precisely everything they do best. This wasn't just any album either, but the first since their 1998 opus, Downward is Heavenward. Inlet is full of unrelenting riffs (opening track "Waves") and '90s throwbacks ("Step Into You") — at least until its gorgeous closing tracks, "Folding" and "Shapeshifter." — AM

Released in 2018, Clean, the debut from singer-songwriter Sophie Allison under the name Soccer Mommy, was widely praised for its youthful energy and personal storytelling. This year, Soccer Mommy released a follow-up, the aptly titled color theory, which finds the band taking on a much lusher and more mature sonic palette that leaves them sounding like, well, a full band. Inspired by the timelessness of pop-rockers like Natalie Imbruglia and Avril Lavigne, color theory quickly gets to its lead single ("circle the drain") and never ceases to let up, combining Allison's distinct writing with a newfound penchant for synthesizers and textured guitar riffs ("yellow is the color of her eyes"). — AM

According to most best-of-the-year lists, this album belongs at the top of the list, and not the bottom (correction: It's the bottom of the top). Much has been said about Fiona Apple's album, her fifth studio in 24 years. Fetch the Bolt Cutters deserves just about every bit of praise that it has received. It was released in mid-April at the absolutely perfect time, when the anxiety of self-quarantine was weighing on everyone. Apple's use of unconventional instrumentation is done magnificently, as she is able to craft a one-of-a-kind masterpiece dealing with some extremely difficult subjects. It's undeniably one of the best albums made in any year, and will likely be known as the defining musical work associated with the pandemic. — NW