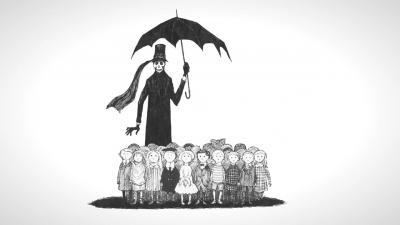 "Gory" obviously derives from the word "gore," which itself comes to us from the Middle English term for "mud" or "muck." So as far back as Geoffrey Chaucer (he of the Canterbury Tales, in case you weren't paying attention in high school English) "gory" has had quite a squelching, squirmy sort of connotation.

Was it destined, then, that Edward St. John Gorey, born in 1925, would make his mark on the world with illustrations and poetry of a vaguely sinister and unsettling manner, throwbacks to the gothic Victorian and Edwardian eras and those people's obsessive fascination with death, the undead, and the subtly macabre? Or was it just sheer luck that 65 years after the publication of his first independent work, we are able to experience the deliciously titled Gorey Stories — which come Halloween time, basically markets itself?

Either way, Erie's own Performing Artists Collective Alliance, or PACA, is bringing yet another unique theatrical release to the stage with a brief two-week run of Gorey Stories, "a musical collage of Goreyana" (to quote Mel Gussow in the New York Times c. 1977), based on Gorey's illustrations and poetry, which have been adapted into 18 playlets by Stephen Currens and set to music by David Aldrich.

An ensemble cast featuring Lara Schaaf, Annie Rosenthal, Betsy Butoryak, Kara Gladney, Ryan Watt, Kerry Lee Hinkson, Marnie Foss, Rebecca Styn and Jamie Foster become pale, eccentric Goreyans, bringing stories such as "The Gilded Bat" and "The Blue Aspic" to life. And while the themes are obviously as morbid as they come, Gorey Stories definitely falls under the comedy category, so when you aren't groaning at the suggestions of gore, you're helpless with laughter — perhaps an altogether more vulnerable state, from the perspective of any ill-meaning ghouls out there. — Cara Suppa

(VIRTUAL) History Happy Half Hour: The History of Arcades