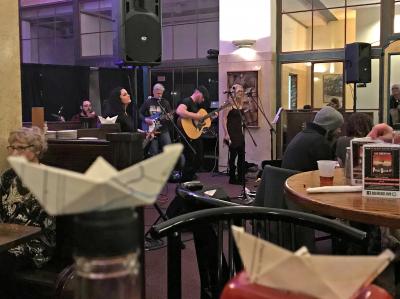 Tiny Paper Boats, shown here performing at the most recent Arts and Drafts on March 9, will join Fred Oakman & The Flood and This American Song at Scotty's Martini Lounge on April 19.

You'd be hard-pressed to find a single day of the week in Erie when there isn't a quality arts event happening somewhere. You especially don't have to look very far most weekends.

While Scotty's Martini Lounge might be best-known for its potent cocktail menu and cigar offerings, it has become one of the most popular venues in the area, thanks to its eclectic, ever-changing schedule chock full of rock, punk, metal, indie, and more.

Enter This American Song, Fred Oakman and the Flood, and Tiny Paper Boats.

This American Song is one of Erie's favorites, a rock 'n' roll sextet with a brassy swerve, who recently played for WQLN's Sounds Around Town Series. Fred Oakman and the Flood will be venturing up north from Meadville, bringing their indie folk vibe to the stage; and Tiny Paper Boats, another sextet, who cites "low lights and dark nights" as the influences for their "lo-fi indie-pop," rounds out the evening. Though TAS and TPB share three of the same members  — Jesse Guerrein, Larry Wheaton, and John Johnston — the sound is markedly distinct.

A good cocktail is an art form. So is a good song. Thanks to this venue and this trio of acts, if anyone asks what you're doing that Friday night, you can tell them, "Pretty much going to the Louvre." — Cara Suppa