Perrypalooza is a celebration of the new and improved Perry Square, the consummation of a decade's worth of planning and upgrades. 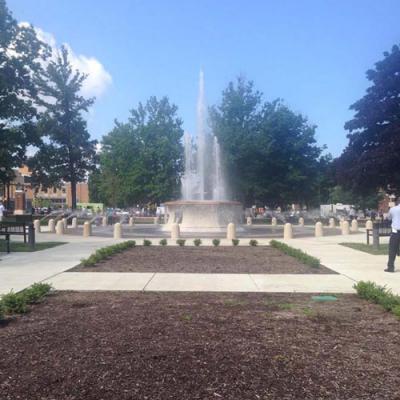 Oliver's park has gotten a twist – and the time has arrived to start enjoying the Dickens out of it.

Perrypalooza is a celebration of the new and improved Perry Square, the consummation of a decade's worth of planning and upgrades. You needn't even hazard a guess – Perry Square is and was always intended to be the centerpiece of our urban landscape, dating all the way back to famed surveyor-planner Andrew Ellicott's blueprint for the City of Erie in 1795. Throughout the 19th century, what was a pocket of untamed wilderness gradually became a well-manicured refuge from the bustle of downtown life. Disorderly trees were cleared for orderly trees (arbor-tration), the ravine and creek on the east side were filled in (because nobody likes asymmetry), fountains were installed, walkways were paved, and landscaping was implemented.

Perry Square is and was always intended to be the centerpiece of our urban landscape, dating all the way back to famed surveyor-planner Andrew Ellicott's blueprint for the City of Erie in 1795.

However, after the last set of major renovations (in the waning years of the Tullio administration), little had been done to help our beloved bi-centenarian keep looking its best. Cracks showed; edges wore; imperfections began to announce themselves loudly. That is when the Perry Square Alliance intervened, rerouting Perry Square from the Hot Mess Express to the path of progress.

Four downtown organizations – PNC Financial Group, Gannon University, Stairways Behavioral Health, and Erie Kiwanis – "adopted" the four corners of the park, where flower beds were planted. Thus the reinvention began in earnest, with funds from other local businesses (e.g., Erie Insurance) and state grants bringing the project to fruition. A modern lighting system now illuminates newly detailed paths, the west side of the park has opened up (good-bye gazebo) for performances (hello stage), benches and waste receptacles have been standardized (oh c'mon – don't even ACT like you've SAT on benches this consistent before), and the wonder of one of just two working Edison Fountains has been restored (with a few contemporary flourishes sprinkled in).

A host of entertainers will brighten up the Perrypalooza proceedings, including magicians, jugglers, stilt walkers, hula hoopers, mascots, zoo animals, and yes – Miss Kitty herself, reading the books of Erie children's author Marc Brown. If that doesn't stroke your whiskers, surely you wouldn't turn your nose up at local food offerings, live music, or potential prizes.

There's nothing to be on the fence about – in fact, there haven't been fences in the park since 1881. After all, Perry Square is supposed to be the place the community goes to keep it together. – Matt Swanseger