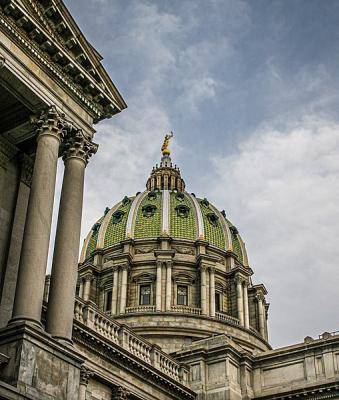 Capitol buildings across the country have been on red alert in the days leading up to Wednesday's presidential inauguration, as the FBI continues to warn of armed protests and the potential for violence in the wake of an election some still believe was rigged against outgoing President Donald Trump.

Although the weekend passed largely without incident — a smattering of armed protestors spotted in Ohio, Oregon, Michigan, and Texas but no one hurt or killed — officials have plenty of  reasons to be wary after the storming of the nation's Capitol on Wednesday, Jan. 6, which many considered a startling affront to the sanctity of American democracy.

In Pennsylvania, Governor Tom Wolf is taking no chances. The state capitol in Harrisburg, which had already been closed to the public because of the pandemic, will be shut down entirely today and tomorrow as a precaution. Barriers have been installed on the premises and officers will be stationed both inside and outside the building.

"The PA Capitol Police is enhancing its visible presence and will continue to collaborate with other law enforcement agencies," said Troy Thompson, spokesperson for the PA Department of General Services (which commands the PA Capitol Police).

No specific threats have been identified in Harrisburg as of yet, but the possibility must be taken seriously after repeated incidents at state capitols over the past year. Last April, an attempt was made to kidnap Michigan Democratic Governor Gretchen Whitmer. This November, shortly after Joe Biden was projected to win the presidency, hundreds of Trump supporters and armed militia members congregated at the Pennsylvania State Capitol. In December, a mob smashed through the glass doors of the Oregon State Capitol.

In a Facebook post last week, Gov. Wolf promised "I won't allow what happened at our nation's capital to happen in Pennsylvania. We're taking the necessary measures to ensure everyone's safety and security across our commonwealth"