'Phantom' Fan-time at the Erie Playhouse 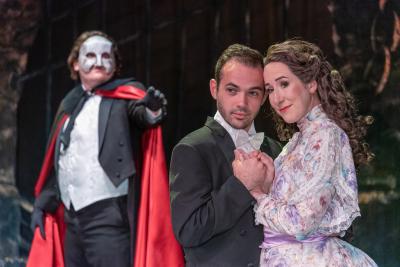 Rick Klein
Based on the same Gaston Leroux novel as Andrew Lloyd Webbers' *Phantom of the Opera, Maury Yeston's *Phantom is perhaps truer to the source material.

The year was 1988. Andrew Lloyd Webber's The Phantom of the Opera had made its West End debut to resounding acclaim two years prior and had just opened on Broadway in New York. Maury Yeston, composer and lyricist (who had recently won the Tony for Best Musical for Nine), watched in dismay as preparations for his next project, also based on Gaston Leroux's novel, dissipated around him, in a case of truly unlucky timing.

It wouldn't be until 1991 that his production, simply titled Phantom, came to fruition through the work and talent of Theatre Under the Stars, in Houston, Texas. Phantom never became the cultural icon that Andrew Lloyd Webber's flashier, sexier show is, but with over 1,000 productions all over the world since its debut, it is a significant and worthy retelling of the Leroux horror story, deepening the complexity of the characters.

Indeed, Leroux himself (were he not dead these last 93 years) would have recognized Phantom's plot as more distinctly true to the original source material, including a greater emphasis on the Phantom's past and his relationships with people in the opera house.

The Erie Playhouse is delighted to once again bring to the stage Phantom, with its melodic, operatic score, vivid costumes designed by Richard Davis and Ryan Ingram, and dramatic plot. Only three newcomers make their main stage debut in Phantom, so the vast majority of cast members are returning actors, including Nick Carver as the obsessive, tormented titular character, Kate Thiem as the innocent ingénue Christine, and Joleen Jeffery as the arrogant, ambitious Carlotta — whose showstopper "This Place is Mine" is a show highlight and a must for any lover of musical theater.

With just 10 performances running through the last two weeks in September, Phantom is a Parisian spectacle with an expiration date, so don't miss it. — Cara Suppa