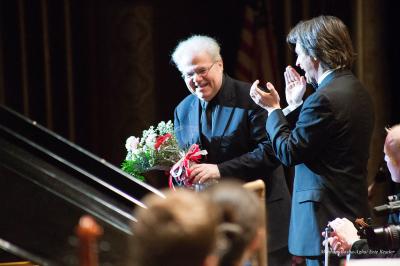 The Erie Philharmonic will be opening the renovated Warner Theatre on January 23 with a premiere concert featuring pianist Emanuel Ax. The program will feature a variety of selections including "Rapture" by Christopher Rouse, Chopin's Piano Concerto No. 2, and Igor Stravinsky's famous work, "The Firebird: Suite" from 1945.

Ax has had a history with the Erie Philharmonic dating back to 2017 when he first debuted there. "We knew that we couldn't screw this up and we really, really needed to bring in something big," said Steve Weiser, executive director for the Philharmonic. "And we just had a very good relationship with Emanuel Ax."

Bringing his world-enlightened experience to the Warner Theatre, Ax previously played with the Vienna Philharmonic and London Symphony, collaborating with Grammy Award-Winning cellist Yo-Yo Ma and violinist Leonidas Kavakos. He is also a Fellow of the American Academy of Arts and Sciences, having won awards for his interpretations of Haydn, Brahms, and Beethoven.

In the program description, Ax's reasons for selecting the piece are made clear. "Ax has chosen Chopin's Piano Concerto No. 2, a near-perfect combination of rhapsodic romanticism and sinuously-drawn melodies. Chopin's concerto brims with his youthful creativity, complete with a Viennese waltz and Polish mazurka finale."

Ax was a last-minute addition to the program, as the previously featured soloist had to back out due to a scheduling change. Within five minutes of calling his agent, the orchestra had locked in its big guest, which Weiser attributes to the rapport Ax was able to build with Erie Phil music director Daniel Meyer back in 2017. "[Meyer] is such a respected force in the music community," effused Weiser. "I think people love working with him. I really think that it just speaks volumes for us."