Pick of the Week: The Erie Summer Festival of the Arts

It began in 1968 when the visions of two people became one: host an alternative art and music event in Erie. Forty-four years ago, a few tables and a stage where a handful of local musicians performed adorned some green lawn space at Penn State Erie, The Behrend College. Fast-forward four decades later to when a three-day festival featuring a juried fine-art exhibit, multi-media workshops, a host of children?s programs, and three-days worth of art and musical performances unfurls at Liberty Park and Burger King Amphitheater on Erie?s Bayfront June 22 to 24. 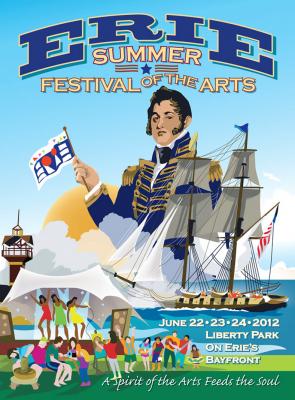 It began in 1968 when the visions of two people became one: host an alternative art and music event in Erie. Forty-four years ago, a few tables and a stage where a handful of local musicians performed adorned some green lawn space at Penn State Erie, The Behrend College.

Fast-forward four decades later to when a three-day festival featuring a juried fine-art exhibit, multi-media workshops, a host of children's programs, and three-days worth of art and musical performances unfurls at Liberty Park and Burger King Amphitheater on Erie's Bayfront June 22 to 24.

And for the 44th Annual Erie Summer of the Arts, second-year President S. Vincent Palermo wants to up the ante even more.

"Last year we beefed up the music," Palermo explained of his accomplishments during the first Festival under his helm. "We brought back top-notch entertainment, we had continuous entertainment on three different stages, we had multiple sculpture gardens—we brought the arts back into the arts' festival."

Having worked with the festival for 15 years when he first began as a board member and an assistant to several presidents before him, Palermo wants to continue growing the Festival as an event that offers something for everyone.

"That was one of the top priorities: restructure the organization back to what the original mission and vision statement was from 1968," he continued. "This year I wanted to take it one step better."

Even though the Festival, like it did last year, sometimes sees a few days of rain, it still regularly draws between 25,000 and 50,000 people. Knowing he wanted to keep the momentum building from last year's success, Palermo counted all the coins from grants and donated funds to decide how best to bring as much diverse talent as possible to the three-day event.

Priority number one: not one headliner this year, but three. This year, Palermo booked: J.D. Eicher and the Goodnights on Friday; Sister Sledge featuring Kathy Sledge Saturday night; and North East-native Tyson Bowman as well as Mary Alice Brown on Sunday, who, in tradition, closes out the Festival.

In addition to the music, Festival frequenters will have the chance to enjoy art from the tri-state region in this year's Ruth Jageman Panorama, a juried art exhibition on display from June 22 to July 15 at Gannon University's Schuster Theater. But hanging on walls isn't the only place art can be found during the Festival.

"We're very fortunate to tie our theme and a lot of areas of the Festival with the celebration of the War of 1812 and Oliver Hazard Perry," Palermo said of the festival's involvement with the Perry 200 Commemoration that kicked off early this year and continues through 2013.

While four of the event's posters depict Perry and the War in some way, Palermo is most excited for the Interactive Panoramic Chalk-Walk Mural—art found not on walls but under feet. Twelve Erie artists will come together, each chalking a section of the 100-foot by 12-foot mural portraying the War of 1812, Commodore Perry, and the USS Brig Niagara. Barring inclement weather, the mural will be finished Saturday for Festival patrons to enjoy that evening and all of Sunday.

From music—aside from the headliners, local talent, such as Eric Brewer and Friends and Ron Yarosz and The Vehicle among others will grace the main stage, and Palermo is building on the success of last year's Festival Strings as he now additionally is offering Festival Pop and Festival Chamber Music—to art in galleries, sidewalks, vendor tents, and more, Erie Summer Festival of the Arts mixes the best of art, music, craft, and food, as Erie spreads her arms wide to embrace the fruits of the summer season. And Palermo hasn't forgotten the key ingredient: admission to the festival is free.

"It's kind of being prejudiced if we start charging because it would be a select class that would be coming down there and this arts festival is for the community to enjoy, regardless of whether you can or cannot pay," Palermo said.

For more information on the festival, including activities in the Children's Area, times of shows, and a full list of events, visit ErieSummerSestivalOfTheArts.org.