On Thursday, May 17, an official opening ceremony will reintroduce ?The Feather,? now reconstructed and here to stay. 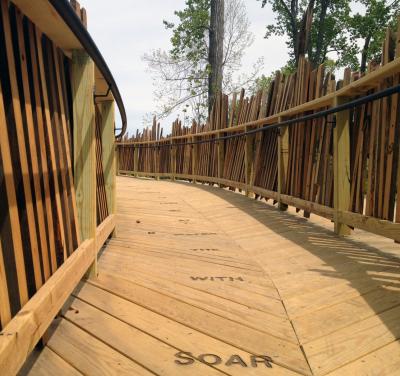 Every local has heard the harrowing tale of the tornado that swept through Presque Isle State Park two summers ago. Trees were uprooted and power lines were knocked to the ground. The damage was so bad, PI had had to close to clean up the wreckage.  Among its casualties was "The Feather," the public art piece that served as a walkway to botanical bliss on PI's bay side.

However, it wasn't ready to float away from everyone's memory forever. On Thursday, May 17, an official opening ceremony will reintroduce "The Feather," now reconstructed and here to stay.

This flora-functional piece was a collaborative effort between the Presque Isle State Park and the Erie Art Museum. Art Museum Director John Vanco asked Angelo Ciotti, an internationally-known environmental reclamation artist, to help bring it back from ruins. Ciotti, originally from Pittsburgh, has an extensive resume of restoring natural habitats and leaving his artistic mark on them. After studying in Pittsburgh and Boston, he sought an even higher art education in Florence and Rome before returning stateside with his talent. He's revitalized urban settings that were raw from long-term industrial use (check out his Earth Couch and Chair on angelociotti.com). His ideas have helped stabilize sand dunes in Savannah, redirect storm water runoff on I-79 around Meadville, and heal a stripped coal mine in Wilkes Barre through re-vegetation, among many other projects.

In 1996, when  Ciotti first saw where "The Feather" now sits, he knew instantly it was a perfect location.

"At that time, you could barely see the water that was beyond the trail's edge," Ciotti says. So he let his curiosity lead him through the patch of trees and cat tails to what was waiting for him on the other side.

"There it was – this beautiful little lagoon," he recalls. "And when I looked down, I saw a single white feather."

And with that single white feather, the public art piece we now enjoy was born. Where he planned the location in '96 remains the same today – just after you catch two glimpses of the bay through the thick cover of trees that stretch upward into a canopy. You then see it on the right side of the road and trail—nonassertive but very much drawing your curiosity toward its first wooden plank.

"That moment gave me the idea of building a feather that could be used as a vehicle to carry people to the view of this lagoon and the bay, to see the real art – nature."

But as we all know, as peaceful as Mother Nature can be, hell hath no fury. The tornado that touched down in June 2010 wiped out parts of the natural landscape as well as the "The Feather," which blended in so perfectly.  If you can cancel out the sounds of the car and chatty tourists on surreys whirring past, you can hear just as much as see how this piece blends in with what PI already offers. Birds chirp while wind picks up through tree limbs and tall grass, swaying in applause of the art that is there to honor exactly that. "My thought was that 'The Feather' was only art," says Ciotti. "I didn't feel a loss, but I felt a tremendous loss for the trees, the ones that were more than 100-years-old and so big you couldn't put your arms around them."

There was no set plan to rebuild the artwork after the tornado. Then the phones started ringing. People began to ask Vanco and Presque Isle State Park Operations Manager Harry Leslie if "The Feather" would be reborn. So after raising the necessary funds, a team consisting of Kerchansky Construction, Mercyhurst University Art Department Chair Daniel Burke and three students--Samantha Fiorello, Lauren Fraser, and Rachel Playso--and Ciotti got to work, completing the reconstruction of "The Feather" in roughly one month.

In terms of dimensions, it's exactly the same as before, mostly because some materials from the original art piece were recycled. When you think about art that focuses on the ever-decomposing-then-reviving world around it, is there any other way to rebuild? The biggest and most expensive part of the piece, the  mounted posts with steel fan-shaped anchors underground, are still in place. Treated lumber was brought in to provide a new structural base, while old wine barrels were once again transformed into cat tails. The real ones have yet to grow back after the damage, but they will with time. Pictograms grace the wood surfaces of "The Feather," which represent traditional Native American art. The pictograms in the first Feather were more contemporary, Ciotti says, while the second gets back to the roots of indigenous art.

In fact, that is who this homage to natural beauty is dedicated to: The Native Eriez. Ciotti translated the poem carved into the exterior of "The Feather" in the language of the Seneca, the closest-affiliated tribe to what is still known of the Eriez. With a public piece such as this, that devotion would be difficult to disagree with.

The opening ceremony is open to the public on May 17 at 5:30 p.m. at the site of "The Feather." Join artist Angelo Ciotti in celebrating what turned out to be one of Erie's triumph-over-tragedy delights.

Julia Nene can be contacted at jnene@eriereader.com