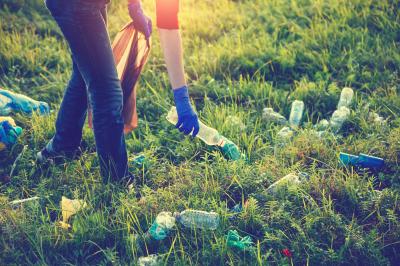 Spotted lanternflies are unwelcome pests. Emerald ash borers are a nuisance. But more devastating to Pennsylvania's environment than either of these invertebrate species has been a class of vertebrates referred to colloquially as "litterbugs," although you might know them better as family, friends, neighbors (or "ignoramuses" and other words unfit for print).

Pollution is a problem in the Keystone State. Consider that during a 2018-19 Pennsylvania Litter Research Study, which measured on-the-ground litter counts in 180 locations (populous and not-so-populous), local roads averaged 1,030 litter items per mile, adding up to an estimated 502 million litter items on roadways throughout the state (with cigarette butts and plastics comprising two-thirds of it). A cost survey of nine Pennsylvanian cities — including Erie along with Allentown, Altoona, Harrisburg, Lancaster, Philadelphia, Pittsburgh, Reading, and Scranton — found that an average of $68 million was being spent annually on litter prevention, education, cleanup, and enforcement. The fact that 80 percent of those funds were allocated toward the cleanup aspect shows the message hasn't quite gotten through.

It's not that residents don't know that littering is detrimental to property values, tourism and business, tax rates, and the environment — 76 percent of the 500 Pennsylvanians polled by phone during the study agreed. The distressing part was that nearly half of them didn't care, or couldn't wait to dispose of their trash because there was no waste receptacle nearby. These attitudes highlighted the need for the littering behavior change action plan being implemented by the Pennsylvania State Department of Environmental Protection (DEP) in tandem with the Pennsylvania Department of Transportation (PennDOT) and Keep Pennsylvania Beautiful non-profit.

That action plan seeks to attack littering from multiple angles — environmental education, how to better place and distribute waste receptacles, whether different regulations or enforcement strategies are necessary, and ways to assist local communities financially toward these ends. Until it's fully executed and its impacts can be evaluated, however, there volunteers will need to continue to pick up the slack. And they do a tremendous job of that annually through the Pick Up Pennsylvania initiative.

Pick Up Pennsylvania is a biannual, coordinated effort to eradicate litter wherever it may lie — alongside roads, in parks and neighborhoods, and along coastlines. Since Keep Pennsylvania Beautiful instituted it in 2016, approximately 150,000 volunteers have helped remove 147,510,851 pounds (over 73,755 tons) of trash statewide. This year's spring session was canceled due to COVID-19, but Keep Pennsylvania Beautiful and its partners in the DEP and PennDOT are hoping to meet or exceed the benchmarks set in 2019's fall session, when 12,610 volunteers collected 488,135 pounds of trash across 382 events.

They'll have an opportunity to get more than their landfill through Nov. 30, when the 2020 fall session comes to a close. Prospective volunteers can search for litter collection events near them (filterable by county) on the Keep Pennsylvania Beautiful website, or register an event of their own. Everything required for litter remediation will be provided to registrants as supplies last, including bags, gloves, and safety vests. Those who participate in Pennsylvania's Adopt-a-Highway program are welcome to sync their own biannual cleanups of their adopted two-mile stretches of highway with this campaign.

Pick Up Pennsylvania itself is synced with the Ocean Conservancy's much broader International Coastal Cleanup, the world's most extensive volunteer effort to boost the health of oceans and waterways around the globe. The conservancy warns that any bit of land pollution left unattended has a very good chance at becoming local waterway pollution and eventually marine pollution — yes, even that Fruit Stripes gum wrapper or Yoohoo bottle that blew out of your passenger side door and into the nearest storm drain. Thus if we are to keep Pennsylvania beautiful, we must "think globally and act locally."

Not if you're a litterbug.

In reverence for the sea turtles, Matt Swanseger is either savoring pureed food-for-thought through a biodegradable drinking gourd, or answering your emails at mswanseger@eriereader.com