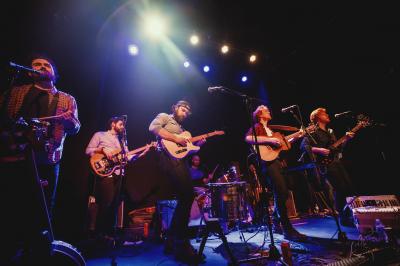 Just south of us in Pittsburgh, Carnegie Mellon University is doing incredible things with robots and AI, all of which have firmly established the school as a top STEM (science, technology, engineering, and mathematics) destination.

But did you know that the Carnegie Mellon School of Drama has been quietly churning out musical virtuosos at an astonishing pace?

Many of them end up in professional musical theater, including Josh Gad from The Book of Mormon and Leslie Odom Jr., Renee Elise Goldsberry, and Rory O'Malley from Hamilton.

Brett Johnson, the director of the Mercyhurst Institute for Arts & Culture, said, "the members of PigPen Theatre Co. are all Carnegie Mellon-trained theater actors, and they bring that knowledge of storytelling, showmanship, and the communal nature of theater to their concerts."

While the group has two musical theater shows currently in the works (The Tale of Despereaux and Water for Elephants, both based on novels), they have also taken their myriad instruments — including guitar, banjo, drums, accordion, keys, and more — on the road and will be performing an intimate but impactful concert in the Walker Recital Hall at Mercyhurst University. PigPen has, if you're curious, released two full-length albums (2012's Bremen, and 2015's Whole Sun), as well as an EP (The Way I'm Running), and they have a collection of imaginative cover songs available on their website and YouTube channel.

This group of seven musicians, singers, and performers met in Pittsburgh and formed a group that has dabbled in a variety of theatrical forms, but who remain true to the basic idea that each show is a tale which must envelop the audience in its inescapable magic.

Johnson added, "Our patrons will feel as if they're spending an hour or so in someone's living room, swapping stories and songs, as opposed to watching a traditional concert. We're in for a treat!" — Cara Suppa