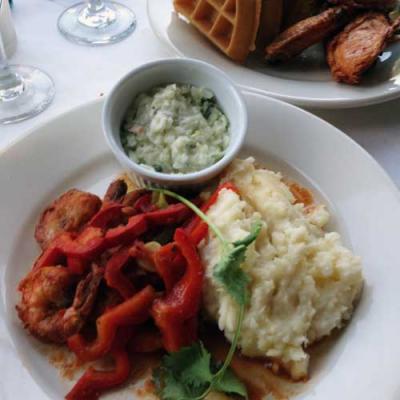 The words "soul" and "food" are intrinsically fused when any dining experience extends beyond devouring fast food in our cars or consuming leftovers over a kitchen sink.  There's something about the relationship, the beyond carnal connection we have with that which we consume, as if for a moment, we're doing more than sating our simple stomach pangs and feeding more than mere hunger through some communion.

A good meal, then, can exhibit as much soul as does its eater. But Thomas Keller has said that a recipe bears no soul – that the chef must infuse the dish with it. The chef, then, a god of sorts with creation, an art to be enjoyed.

The food at Pineapple Eddie's may not be Soul Food specifically, but chef  Jean Paul's food certainly has soul.

Situated at the corner of 10th Street and Weschler Avenue sits the Southern American and Caribbean restaurant – off the beaten path in a neighborhood with nary a surrounding restaurant. The ambiance of this Southern Bistro is simple yet both warm and welcoming – a deli counter displaying delectable desserts, a semi-exposed kitchen where the chef and his cooks can be seen creating, and tables arranged closely in the smallish space.

Currently, Pineapple Eddie's is one of Erie's BYOB gems, so my dining companion and I came prepared – as I'd recommend you do – with a bottle of wine for the evening's courses. But be warned: This is about to change, as the restaurant has applied for a liquor license. While patrons will no longer be able to bring their own beverages of choice for the evening, there seems to be room for great potential, with a beautiful bar in the back room begging to have life breathed into it.

To get started, we appropriately perused the "Gettin' Started" section of the menu, featuring a tempting cheese platter – a combination of four imported and domestic cheeses paired with peppered salami and bruschetta – as well as a basket of six fried, crispy wings, and several dips. We opted to begin with the fish fry though, a plate of crispy catfish fingers.

Easily enough to satisfy two, the catfish strips were lightly breaded with a slight crunch to each bite. The coating kept the fish from overwhelming the experience without being grease-laden, resulting in a nice introduction to our evening.

After our appetizer and before our entrees, we enjoyed the complimentary cornbread muffins. Although drizzled with a sweet concoction of honey and cinnamon, the muffins were drier than expected by looks and needed just a touch of butter to soften the grittier texture.

For entrees, one can either be "Sittin' a Spell" or choose from the "Southern Favorites." The former features more common plates, with steak, griyo, and several options for chicken, fish, burgers, and salads. The latter leaves diners deciding between a variety of n's – shrimp n' grits, fish n' grits, chicken n' waffles, pasta, or sautéed fresh vegetables.

While the griyo – seasoned and lightly fried cubed pork chunks – and anything n' stone-ground yellow grits sounded good, we, with some help from our server, opted for creole spiced shrimp and the chicken n' waffles.

She cautioned us though: the spiced shrimp will be really spicy, like, burn-your-mouth sizzling spicy, and the chicken would be rich, like, decadent dessert rich.

She was right… about one of the dishes.

The shrimp, despite being neither spicy – we actually wondered if they forgot the spice entirely or should simply rename the dish – nor sizzling, was good. Well-rounded combinations of being plump, succulent, and flavorful, the shrimp were plated with red peppers. The mashed potatoes – a special side dish for the night – made a strong case for being a consistent, regular side, since they held their own, needing no gravy.

The chicken n' waffles were rich, like, decadent dessert rich. And they were delicious. And decadent. And full of soul.

A heaping pile of Belgian waffles stacked next to the golden fried chicken, the dish blended simple starchy sweetness with savory spice – a harmoniously rich chord of maple syrup-soaked waffles resolving with succulent, savory chicken. Like the fish before it, the chicken wasn't grease-soaked, resulting in a clean appeal, leaving the meat unmasked by any unnecessary batter.

Stricken with a serious sweet tooth, we saw this as an opportune time to move to dessert: a piece of peanut butter pie. Topped with nuts and a chocolate drizzle with the whipped peanut butter atop the chocolate, this delicious dish best demonstrated that intricate communion between soul and food that Jean Paul and his kitchen crew strive to achieve.

As a chef, it can't be easy ensuring that soul is injected into each dish made, let alone each dish made each night. But at Pineapple Eddie's, you'll find personality and passion in the sweet, savory, succulent notes of these soulful Southern American and Caribbean dishes, which definitely did more than simply  sate simple stomach pangs – they satisfied our soul.