Pippin aims to not only entertain and engage, but also to enchant and amaze its audience. 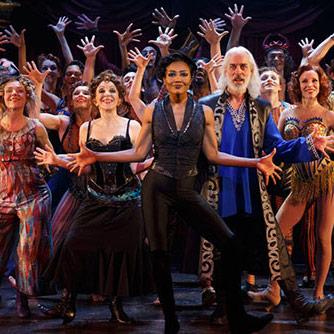 Circuses are known as the "greatest show on Earth," so it shouldn't be surprising that the big-top revival of the Broadway musical Pippin – first performed in 1972 – won "Best Revival of a Musical" in 2013.

The show, coming to Erie this month, aims to not only entertain and engage, but also to enchant and amaze its audience with high-flying stunts, hula-hooping acts, knife-throwing talents, and other circus-related performances.

"A truly dazzling feat of theatrical alchemy," Chris Jones of the Chicago Tribune wrote about the musical. "An inestimably clever blend of Broadway tradition and raw risk."

The musical features songs by Stephen Schwartz, who is well known as the composer for the beloved musical Wicked.

Originally directed by Tony-winner Diane Paulus – who is known for Hair and Porgy and Bess – Pippin tells the story of a young prince who is searching for excitement and hopes to find meaning in his life. Pippin's quest leads him on the adventure that he desired and leaves him to make some hefty decisions, as he joins the war and falls in love.

The musical features songs by Stephen Schwartz, who is well known as the composer for the beloved musical Wicked. Among Schwartz's songs that ultimately make this musical such a sensational show are: "Magic to Do," "Corner of the Sky," "Morning Glow," and "No Time at All."

If it's not the "greatest show on Earth," the revival of Pippin, which has won four Tony Awards and four Drama Desk Awards, promises to impress and will certainly be one of the greatest shows in Erie this year. – Tracy Geibel