Pittsburgh's Instead of Sleeping Headlines at Basement Transmissions 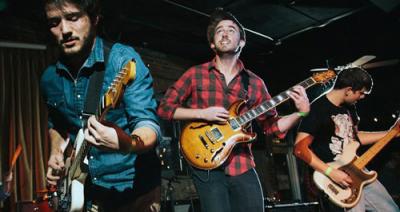 Dec. 13, 2014 (12/13/14) will be the last sequential number date of the 21st century.  According to the New York Post, many couples have decided to celebrate the rare occasion by saving the date for their weddings. And unless you're a mathematician or have an affinity towards patterns, there isn't much else to be excited for that day.

But for music lovers in Erie, Basement Transmissions is giving us something to be thrilled about.

One of the region's most popular indie rock bands, Pittsburgh's Instead of Sleeping, are making their way back to Erie. Having frequently played the old BT on State Street and headlining the first-ever show at the new location, they are no strangers to the charms of Erie. Their precise musicianship and stage presence keep fans coming to their shows in greater numbers with each return.

Instead of Sleeping's latest album Young Lungs steers away from the straight-forward indie rock prevalent on their previous album, with songs like "The Ones" giving off a more electronica vibe while still staying true to their distinct and dynamic style.

Rounding out the bill are four local acts – Joose, GNOSiS, The Standby, and Frame and Mantle – ranging in sound from rock to punk to experimental jam band.

You won't have another chance to see a sequential date on the calendar until Jan. 2, 2103, so what better way to celebrate than to watch some great regional bands and support the local music scene.