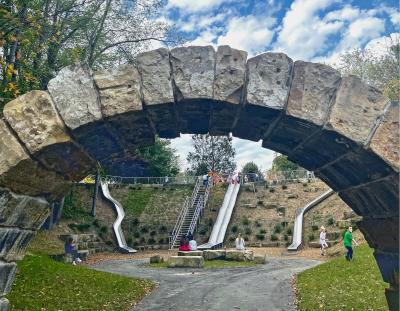 Jessica Hunter
This archway, constructed from Pennsylvania limestone, beautifully frames the new Griff Slides at Frontier Park. The project, completed at a cost of over half a million dollars, has transformed an area of the park into one of its major attractions, one that has brought out the youthfulness in visitors of all ages.

You wouldn't know it by looking at their shiny new additions, but the folks at Lake Erie Arboretum at Frontier (LEAF) Park are usually not the type to let things slide.

Whereas the COVID-19 pandemic left many other nonprofits stumped, LEAF branched out in new directions, keeping with its mission "to generate a greater awareness of the importance of trees to our lives" by "creating educational opportunities and outdoor experiences for [the] community" — far beyond their home base at Frontier Park.

Pre-pandemic, in-house programming and facility rentals at the LEAF Education Center accounted for 20 to 25 percent of its income streams, according to LEAF executive director Vern Peterson. While Peterson foresees the building hosting its typical full complement of events and activities down the road, in the meantime "we've taken a lot of what we're doing out into the community and are trying to involve as many people as we can."

At the center of their outreach has been the ReLeaf program, which has to date planted 1,700 trees on Erie School District properties and 5,000 trees overall. The ultimate goal is to plant a sapling for every Erie County resident — 275,000 trees in total, with particular attention paid to those low to moderate-income areas with no trees and no shade canopy whatsoever.

"You really would be surprised how expensive it is to plant a tree," expresses Rosa Showers, LEAF programs director. "For someone to buy a six to eight-foot tree, it's a couple of hundred dollars — and that's just to buy it, that's not the labor that goes into [planting] it. So by getting these smaller trees, we're not only able to plant more, but faster."

To help orchestrate this, LEAF has allied themselves with the Keystone 10 Million Trees Partnership, which helps unite ecologically-minded businesses, agencies, and organizations with nurseries and growers throughout the state of Pennsylvania. Not only has ReLeaf photosynthesized interest from Erie's Public Schools, but also corporate partners like FirstEnergy (1,100 trees planted) and government entities such as the Housing Authority of the City of Erie.

Beyond reducing stress and beautifying the environment, Peterson noted the timeliness of the initiative as we strive to curb climate change and global warming — according to the Arbor Day Foundation, the average fully mature tree absorbs 48 pounds of carbon dioxide from the atmosphere each year while releasing enough oxygen to supply two human beings for the same period. In this day and age, it cannot be understated how important it is to breathe.

For decades, Frontier Park has been the preferred destination in westside Erie to do just that, and even more so in the past year and a half, with people especially desperate for a breath of fresh air. "In that first year of the pandemic, I think I saw as many people using this park walking or riding as I had in the past five," notes Peterson. "It's been amazing," adds Jamie Keim, LEAF creative director.

So as much as Peterson, Showers, Keim, and LEAF's board of directors have been reaching outward lately, they're also aware of what an asset Frontier Park is to the community and are continuously looking inward for ways to maximize its potential. Carved into the hillside just north of the Patricia McCain Amphitheater, the newly installed Griff Slides are just the latest expression of that. "The section of the park that they were placed in was really terrible, it was totally unusable. I used to call it the armpit of the park — it was a former brick dump yard, and we found all of that while excavating the site," explains Peterson.

Named for Erie property developer, LEAF board member, and donor Rick Griffith, the Griff Slides were inspired by similar setups found in New York City's Battery Park and elsewhere. Although the four ground-mounted slides seemingly appeared overnight, making them a reality was a drawn-out game of Chutes and Ladders, from the initial grant proposal being rejected (but awarded the following year in the amount of $425,000 after modification) to difficulty finding a low bidder on the construction (Considine Biebel was eventually awarded the contract) to the manufacture of the slides themselves (LEAF was able to source them from Germany through a company called Goric).

By the time the slides finally arrived on site in March, a large portion of the grading and the footings were already completed. "Working through over a year of construction meetings with the city and Considine Biebel, we've finally crossed all the T's and dotted all the I's and got the city's permission to do a soft opening," recaps Peterson. "We hired an engineering firm and they said that the structure of the arch, as well as the slides, were actually over-engineered, I'm happy to report. It's amazing what a big draw this is to the park."

"The first day it was open, there was pure joy coming from that area," enthuses Keim. And not just from children, adds Peterson. "The afternoon of our soft opening, I helped two 80-year-old ladies get to the slides and they took turns filming one another going down. It really brings the kid out, even in the elderly." Where good vibes are concerned, the Griff Slides are a prolific pollinator.

As sliding board season starts to shift into sledding season, the LEAF team reflects fondly on all of the achievements of the past year — a part-time groundskeeper hired, all the walking trails regraveled, acquisition and adaptation of a former bayfront city maintenance building into a ReLeaf staging area for tree planting (and future nursery), another popular run of LEAF Open Markets, and a successful LEAF Festival held in tandem with Erie's Blues and Jazz Festival. With plantings, until the ground is frozen and event planning and educational initiatives extending well through the frosts of winter, their efforts — and their impacts — are truly evergreen.

We're pining to see what's next.

Slide into Matt Swanseger's inbox at mswanseger@eriereader.com  — but not until you plant a tree first.