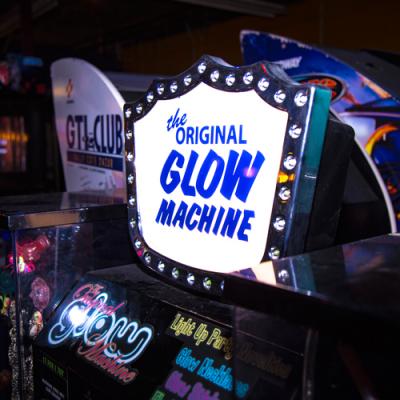 It's Friday afternoon and I'm staring into the eye of a dinosaur. It stands 5-foot-8, weighs at about 260 pounds, and exhibits a distinctive set of markings. It glares back at me unflinchingly with a sharp Fujitsu MB14241 monochrome display, but never do I feel threatened. While this particular individual might have bled my ancestors for a pint of lunch money in its day, it otherwise plays nicely.

Au contraire, mon frère – the fossil record (© 1978) indicates we at one time not only coexisted, but flourished as contemporaries.

Taito's Space Invaders ushered in what has become known as "The Golden Age" of video arcade games. The cultural afterimage of pixellated aliens streaming down the screen ad infinitum is burned into our collective consciousness. At first, their movements are slow and deliberate, but as the difficulty ramps up, their speed and numbers increase. Apparently humankind poured all of its resources into just one laser cannon (our militaries are woefully underfunded in this virtual reality), and it's up to you and you alone to defend the fate of Mother Earth. How delightfully overwhelming.

There is something so pure, so visceral about that experience, and all arcade titles thereafter sought to replicate it. These games push our reptilian hot buttons as we push theirs – something in our primal core is reawakened and reengaged. Our reflexes are tested to the maximum as we fight against the chaos onscreen, but there is no risk of incurring actual physical harm (unless you punch something in frustration – people do silly things when their prefrontal cortex is suppressed).

That is why just as many (if not more) adults flock to Playport in Millcreek Township as children. The place is buzzing with both when I arrive, a testament to the arcade's timeless appeal. A week earlier (the first of February), co-owners Brad and Michelle Nuce had effectively doubled the facility's square footage, from around 5,000 to 9,000. Playport now occupies the entirety of a building that once accommodated Port Erie Boatworks and Infinity Total Car Care at 2730 West 12th Street, near Peninsula Drive. 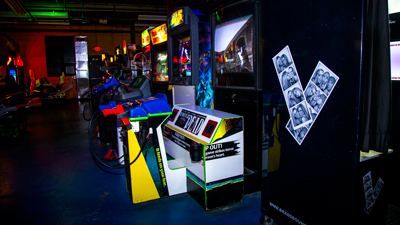 Many children are enthralled with the idea of becoming a paleontologist, but few are smitten with the notion of turning over every rock to find what they're looking for. Brad scours auctions, basements, garage sales, and even barns in search of new machines to put on exhibit in his interactive museum. It's rare that a specimen is perfectly preserved, awaiting him in some manger bathed in heavenly light – it is an investment of time and energy to restore each to working order.

"It's quirky," his wife says with a chuckle.

Assets You Could Bounce A Quarter Off Of

The business began – like most do – as a passion. Upon settling in Erie after a stint in the U.S. Marine Corps, Brad started collecting used arcade cabinets simply because he liked them. He had no plans of repurposing them for profit. Instead, he and his wife instituted another business, Brad's Bounce-A-Lot Play Land at the All Seasons indoor flea market. When that folded, they continued to rent out their inflatable play fortresses to parties and festivals around town. That enterprise was (and still is) successful. However, Erie winters aren't exactly a picnic, so that revenue stream freezes until summer's warmth restores its flow.

It wasn't until Brad learned how to repair and refurbish old machines that opening an arcade (i.e. an indoor, weatherproof business) became a viable prospect; those skills were the proverbial mosquito trapped in amber that brought his Jurassic Park to life in December 2014. Because he could now acquire cabinets at more manageable costs, his fleet could grow larger and more diverse. It currently numbers in excess of 100, so many that he has the luxury of swapping them in and out, both to "keep things fresh" and to provide relief should one malfunction (the pinball units are notorious for it).

A pretty comprehensive selection of arcade genres is represented – classics (Pac-Man, Donkey Kong), point-and-shoot (Time Crisis, House of the Dead), hack-n-slash (Gauntlet: Dark Legacy), run-n-gun (Contra), fighters (Street Fighter, Mortal Kombat), racers (Daytona Motion Deluxe, Road Burners), and music (Pump It Up, a Dance Dance Revolution alternative). Playport also boasts rarities such as the six-player version of X-Men (only 200 such machines survive) and HyperBowl, a trackball-controlled bowling game formerly an exclusive to Jillian's Entertainment locations (most of which have since vanished). Additionally, Brad is more than willing to "put the feelers out" for anything a customer feels he lacks (per the special request whiteboard).

My posse hasn't rolled six deep since fire drills at Grover Cleveland Elementary, so I regrettably cannot try X-Men, but I do deep-six a few bowling balls in the HyperBowl gutters before returning to some familiar favorites.  The common denominator among nearly all of them is merciless difficulty – blink and you might miss something (i.e. die). My mortality rate is embarrassingly high. Without a doubt, these machines gutted more piggies than Smith's Provisions in their heyday.

Traditionally, after all your lives are extinguished, you're left scrambling through pockets for quarters and/or tokens as the onscreen counter ticks down to zero. Not so at Playport – just 10 dollars (plus tax) buys your immortality.

Traditionally, after all your lives are extinguished, you're left scrambling through pockets for quarters and/or tokens as the onscreen counter ticks down to zero. (Hope you indexed and cross-referenced those cargo pants, cowboy, because the pressure's on!) You either defy its finality or accept it and walk away, a broken man or woman. Not so at Playport – just 10 dollars (plus tax) buys your immortality. Monday through Friday, it's play for as long as you want. On the weekend, it's capped at three hours.

Hardcore gamers might decry such leniency, saying it detracts from the white-knuckle tension of arcade gameplay and rewards amateur sloppiness. But the Nuces wanted the experience to be about freedom, and freedom doesn't fly when it's weighed down by 5 pounds of cupronickel in a fanny pack clasped about the abdomen (just ask the TSA).

The power of nostalgia is not to be underestimated. Trash-talking a living, breathing person next to you or having a crowd rally around you as you go for a high score – there is a thrill to that which knows no age.

For the first 25 years of their existence, arcade and console games co-evolved. A port of a premiere arcade title could swing the tide of a console war (as the uncensored Mortal Kombat did for the Sega Genesis – the Super Nintendo version featured sweat instead of blood and no fatalities, not even your opponent taunting you with a long swig of Gatorade as your character lies on the ground, fully dehydrated) or win it outright (as Space Invaders did for the Atari 2600). However, eventually home consoles advanced so much as to push the arcade to the verge of mass extinction.

Nonetheless, the power of nostalgia – and community (the Nuces enlisted local artists Kevin Burfield and Bill Anysz to paint and construct the Erie-themed Glow Golf area in the rear of the complex) – is not to be underestimated. Trash-talking a living, breathing person next to you or having a crowd rally around you as you go for a high score – there is a thrill to that which knows no age.

Even if, like me, you grew up with dinosaurs.