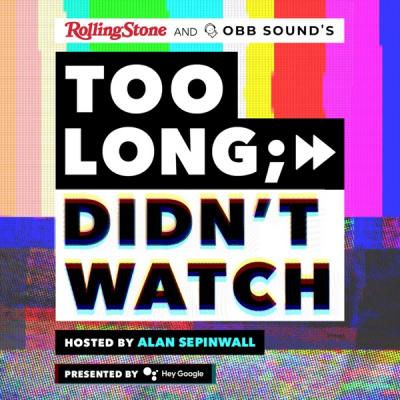 Too Long; Didn't Watch, the new podcast from television critic Alan Sepinwall and Rolling Stone is at once compelling and kind of cruel, an interesting product of a flawed structure. Actors like Alison Brie (GLOW) and Jon Hamm (Mad Men) are welcomed in to watch both the pilot and finale of a TV show they previously "didn't watch." Sepinwall and his guest talk through both episodes, the guest tries to suss out what happened between the beginning and end via a quiz, and there's typically talk of pandemic TV habits. But there's always one moment I pay particular attention to. How much did the celebrity-of-the-week like the pilot, and how bummed are they that the show is about to be ruined for them by watching the finale? "That really makes me mad at myself for not having watched it at the time," said Rob Huebel, for example, after taking part in this experiment for HBO's The Leftovers.

The best way to listen is picking out episodes for TV you've personally seen, while then having fun as the guest attempts to explain the plot. Kumail Nanjiani is the early standout, as he applies his analytical skills from the now-defunct (and excellent) podcast The X-Files Files to the neo-noir American teen drama mystery series Veronica Mars.

I'll be interested to see how the show grows in future seasons (the first season recently ended with comedian Paul Scheer of The League attempting to decipher the blood-soaked Showtime series Dexter), and also see if the aforementioned regret becomes common among guests.