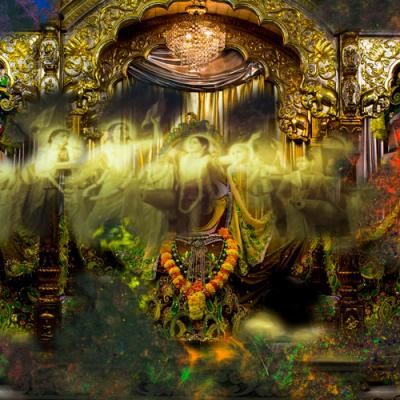 Very few artists do saturated color as well as Gary Cardot, who has new works at the Erie Art Museum's Holstein Gallery through June 24.

Unlike earlier work showing us Ferris wheels and curious storefronts in a straightforward singular way, Cardot is now deconstructing the images, building them back up into abstract constructions, and imbuing them with an even richer palette than in the past.

For example, "Tainted Love" mingles window reflections, hash pipes, video screens, a glowing chandelier, a hookah, and strings of twinkle lights. The composition keeps your eyes moving from one place to the next, finding new things, experiencing the busyness, and feeling the rush of color. All of the components serve its centerpiece, though, which is a sculpture of a shirtless male tattoo artist tucked between a woman's spread legs, working his machine above her breast. Her head is flung back, her orange hair streams down.

For Cardot, this approach is an experimental and formal exercise in light, shadow, substance, and transparency. The results, in many ways, have the feeling of cubism. We are seeing objects from more than angle and point in time, with ATMs eliding into mannequins and then into stairwells. Manipulating images this way, he says, feels like "painting" with photographs.

But he adds that by layering related images he can more completely instill in them "the memory of the shoot or [his] impressions of an event." Therefore, the artificial and lushly detailed worlds Cardot explores become larger symbols of how we divide people.

Cardot's work provides the narrative of diversity our country has always embraced, at least on a superficial level.

Cardot's work provides the narrative of diversity our country has always embraced, at least on a superficial level. Drag queens, bikers, psychics, and brides, Easter parades, religious altars, and the endless kitsch of Times Square all rub elbows. He advocates for learning to incorporate and celebrate that splendid variety, and left me with a Neil Simon quote: "Never underestimate the stimulation of eccentricity." Cardot, however, would replace "stimulation" with "contribution," suggesting that it is exactly our differences that make us strong and give us life. I think he's right.