Is COVID-19 compatible with competition? 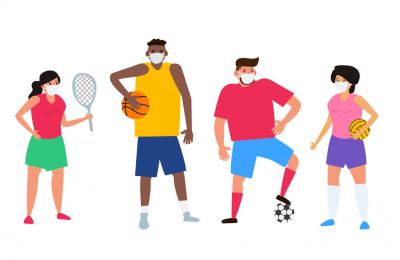 With the 2020-21 academic year drawing nearer, Pennsylvania Governor Tom Wolf is continuing to advocate for athletics abstinence. But is it true that the only safe sport is no sports? Or are some sports safer than others?

The current Centers for Disease Control guidance on sports identifies four risk factors we should consider before gaming on:

The risks are amplified when out-of-county or out-of-state opponents clash, owing to both the travel itself and the disparate rates of infection (and mitigation policies) between regions. Generally speaking, outdoor contests are preferable to indoor contests — a point that would seem to favor most fall and spring sports.

The caveat is contact. Since the SARS-CoV2 is transferred through respiratory droplets, sports contested in close quarters give the novel coronavirus a competitive edge. When bumping into (or running over) an opponent is inherent to the way a sport is played, that additional risk is difficult, if not impossible, to gameplan around. The only thing that can be done is to vigilantly monitor the health of everyone involved, limit travel, and limit participation to those absolutely necessary — which will come as sad news to fans of Friday night lights and Saturday tailgates debarred from the stands this fall.

As a followup to its "Core Principles of Resocialization of College Sport," the NCAA Sport Science Institute released a set of "Action Plan Considerations" which tiered collegiate sports in accordance to contact risk. They are as follows (* indicates a fall sport for either men or women, or both):

As you might imagine, lining up a shot on a wide-open golf course with no one around you does not pose nearly the same amount of risk as diving into a pile of bodies to recover a fumble, or volleying around a ball that everyone has touched and breathed on. Still, there are considerations to be mindful of even with the "low contact risk" sports — for instance, finding yourself in an infected cross country runner's slipstream (i.e., droplet exhaust) could spell trouble. This often happens when runners employ a strategy called drafting — positioning oneself behind another runner as a buffer against the wind. You could tell athletes not to draft, but how well could you enforce it?

It's those sorts of contingencies that led the NCAA to cancel all of its fall sports championships aside from (perennial moneymaker) FBS football — the SEC, Big 12, ACC, Sun Belt, AAC, and Conference USA have not yet opted out. Division II (which includes Edinboro, Gannon, and Mercyhurst) and Division III (which includes Penn State Behrend and Allegheny) voted to nix their fall seasons months ago. Governing bodies of the Pennsylvania State Athletic Conference (Edinboro, Gannon, and Mercyhurst), the Allegheny Mountain Collegiate Conference (Penn State Behrend), and North Coast Athletic Conference are eyeing a return to the court/field/pool in January.

Meanwhile, plans for high school sports are still in limbo. Earlier this month, the PIAA Board of Directors objected to the cancelation of all interscholastic and intramural sports until January 2021, a measure Gov. Wolf and the PA Department of Health have strongly advised for. The directors believed the decision would have "potential negative impact on the students' physical, social, emotional, and mental health," depriving them of both access to training facilities and the communal aspect of sports that is so central to the high school experience.

After consulting with its Sports Medicine Advisory Committee, the PIAA released this statement on Aug. 7:

"Based on currently known information, the Committee believes that STRICT ADHERENCE by schools and teams to their school-adopted plans and the Governor's School Sports Guidance should provide a reasonably safe environment for student athletes to participate in interscholastic athletics as currently scheduled."

The key word there is reasonably safe, which for some parents will not be enough. The PIAA Board of Directors to further discuss the situation on Friday, Aug. 21.

So is there such a thing as a safe sport? Three-time Olympic swimmer Rowdy Gaines and USA Swimming's chief commercial officer Shana Ferguson contend their sport — which traditionally begins its season in late November or early December — is the safest, heads being predominantly under chlorinated water and all. Contact between teammates or opponents is virtually nonexistent (excepting the occasional wayward breaststroke kick) and COVID-19 does not survive in chlorine.

In any case, reason and emotion need to stay in their respective lanes during this pandemic.

Otherwise future high school and college sports seasons are due for a collective belly flop.

Matt Swanseger is a former one-time champion in the 100-yard backstroke for the Strong Vincent Colonels. Send accolades his way at mswanseger@eriereader.com