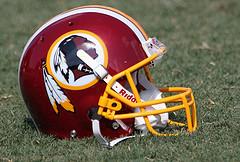 The federal Trademark Trial and Appeal Board ruling last week that that the Washington Redskins nickname is "disparaging of Native Americans" was praised by many and triggered another round of calls for team owner Dan Snyder to do away with the Redskins name once and for all.

But those calls haven't spurred Snyder into any action on the name change front – and from the sound of things, fans opposed to the Redskins name shouldn't expect any substantial movement any time soon.

"We've seen this story before," Bob Raskopf, trademark attorney for the Redskins, said in a statement the club posted on its website last week. He was referring to a previous board ruling that later was reversed by a federal district court.

And just like the last time, Raskopf said, the ruling "will have no effect at all on the team's ownership of and the right to use the Redskins name and logo."

Raskopf indicated the club would appeal the board's ruling, and he added that the club is confident the appeal will be successful -- again.

Raskopf said that the board's ruling last week "simply addresses the team's federal trademark registrations, and the team will continue to own and be able to protect its marks without the registrations. The registrations will remain effective while the case is on appeal."

Despite calls for a change on multiple fronts, including the Oneida Indian Nation, which has mounted a Change the Mascot movement, any change appears unlikely, given Snyder's stance, but it would hardly be unprecedented if it does indeed come to pass.

A number of major college athletic programs have changed their nicknames as a response to protests lodged by various groups, going back to Stanford University, which officially was known as the Indians from 1930 until 1972, when it changed its name to the Cardinals. That lasted for nearly a decade, at which time the school dropped the "s" and simply became the Cardinal.

Other big-time athletic powers that dropped Native American-related nicknames and mascots include Marquette, which switched from the Warriors to the Golden Eagles in 1993, and St. John, which went from the Redmen to the Red Storm the following year.

More recently, Syracuse altered its nickname from the Orangemen (and Orangewomen) to simply the Orange in 2004.

Closer to home, the Cleveland Indians have received some criticism over the years for its use of its Chief Wahoo mascot, which has been around for more than half a century. There had been some talk that the club was phasing out the Chief as its primary logo, but team Director of Communications Curtis Danburg was quoted on Cleveland.com earlier this year that that wasn't the case.

"The fact of the matter is there's no change to our approach at all," Danburg stated. "We have three logos. We have script Indians, we have block-C and we have Chief Wahoo. You will see the same logos in the same place on the uniforms this year. There's no process to eliminate Chief Wahoo."