A local woman's set to make it big in Hollywood.

by Matt Flowers
View ProfileFacebookTwitterGoogle+RSS Feed
April 3, 2013 at 7:00 AM 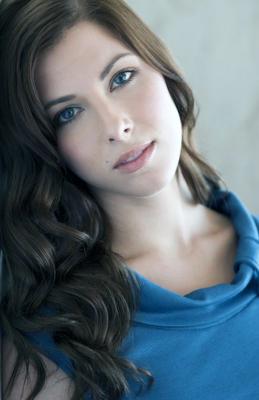 Every artist takes a different path to success but each path is woven with a common thread: rarely is one's first attempt at their chosen craft greeted with ovation. The sculptor makes a pinch pot first, the novelist writes a book about himself, and the rocker learns his first major scale. The world of film acting in is no different.

Erie native and McDowell Graduate Emily Brooks comes from a theater background, acting in school plays until that thread wove its way into her true calling, her true tapestry: film acting. Maybe you've seen her cast a spell as the White Witch in "Narnia" at the Erie Playhouse [13 W. 10th St.] or as the charming Reon Sweeney chasing Billy Crocker in "Anything Goes" at Mercyhurst [501 E. 38th St.], but now you can see her somewhere else: the big screen.

Under tight wraps just like the conclave, "The Appearing's" release date is still secret. The film – based on true

I literally left my body and everything was so real, it was like, really happening to me. This was the first time I had – 100 percent – felt like I was not acting at all… It was really scary, and really real.

events – revolves around a young women's exorcism, her secret past, and the battle with the demons lurking inside her. Emily Brooks promises it'll be out this year; and to make up for it, she dishes about her humble roots in acting, a moment of possession, and most importantly, [slight spoiler alert] stabbing Patrick Swayze's brother.

Matt Flowers: What sparked your interest in taking on an acting career?

Emily Brooks: I started singing at church when I was a little girl… The next thing I know I'm at the Erie Playhouse auditioning for "Rumpelstiltskin."

MF: In how many plays have you acted?

MF: How many of those were back in Erie?

EB: The majority of them were in Erie… Then I moved on to [Indiana University of Pennsylvania] and did shows there… [But] I'm done with theater actually… I realized I just wanted to do film acting… So my parents mustered up some money so I could take this workshop [at the New York Film Academy].

MF: After your study in NYC, did you still have to do some research for your part in "The Appearing?"

EB: Oh yes, I got so into this. I watched every single exorcism movie that was on Netflix and then some. I researched real exorcisms that have happened throughout time, I listened to Latin over and over again…  I wanted this role so bad, and I [only] had three days to read the script, figure out my character, and get the Latin down… I consumed myself with this stuff.

MF: Is that your actual voice in the Trailer for "The Appearing."

EB: That is really me.

MF: How is "The Appearing" different from other exorcism movies?

MF: Are you a big horror movie buff?

EB: Totally, I'm such a sicko. My mom always tells me that because I have always loved horror movies since I was a little kid. I don't know, I like to be scared… It's interesting to me.

MF: What is the best piece of advice you've received from another actor, actress, or director?

EB: [During the last take of "The Appearing] I literally left my body and everything was so real, it was like, really happening to me. This was the first time I had – 100 percent – felt like I was not acting at all… It was really scary, and really real. Don Swayze [Patrick Swayze's brother] says to me afterwards, "That's an actor moment." I looked at him and I was like, "Okay, Don." He's like, "No, you should go and write about that and you should go and buy yourself a cupcake or something." [Laughs] He says, "You've just experienced a moment you'll never go back from."

MF: Who does Don Swayze play in the movie?

EB: Sheriff Hendricks… We have this retractable knife, and there is this part where I use it on him – almost – ahh, I'll leave that open to interpretation, but I accidently stabbed Don Swayze because the retractable knife stopped retracting and it became a real knife! [Laughs]

MF: Tell me a little bit about the director, Daric Gates.

EB: This is like his first big film he directed… He does a lot of work; anything from sound to [film] editing… He worked crew on a bunch of big films ["Mr. & Mrs. Smith," "Friday Night Lights," "A Lot Like Love"].

MF: How many movies have you acted in?

EB: I just got cast in my second big film since "The Appearing." It's filming for seven weeks, and it's actually filming in Pittsburgh… It's a bigger budget than "The Appearing" and it's also going to be in 3D… Unfortunately, I can't even talk about the title right now.

MF: Have you ever worked with an actor or actress that just couldn't act worth a damn?

MF: What do you do in that situation?

EB: Just believe in what's happening as much as you possibly can… [But] a lot of it also has to do with direction. If an actor is doing poorly and cast in that roll, I'd blame it on the direction. I think every actor that does get a part is talented in some way, and it's up to the director to bring that out of them, and sometimes directors don't want to do the work.

MF: What is your biggest achievement?

EB: The immediate thing that popped in my head was being able to rise above negativity and the people who said I couldn't do this, and do it… I think it's getting here [to L.A.].