Blues legend set to grace the stage at Mercyhurst University 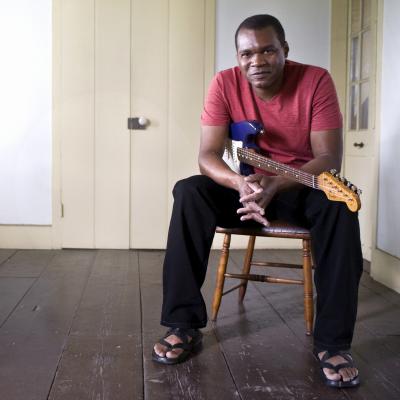 Five-time Grammy-Award winner Robert Cray returns to Erie this Friday, Feb. 24. I recently had the chance to talk to Robert, who's released 20 multi-platinum albums and was recently inducted into the Blues Hall of Fame; here's what he had to say about Erie, his upcoming show, his career highlights, Jimi Hendrix, and "Animal House."

CV: Your show at Mercyhurst University in Erie, Pennsylvania is coming up at the end of February. Have you ever been to Erie before?

CV: A lot of folks here in Northwestern Pennsylvania have probably never seen you play live. What can they expect from your show on the 24th?

RC: Well, we're doing a little bit of everything, going all the way back to the "Bad Influence" album that came out in 1983, and up to our latest release, which was almost two years ago now, a live CD/DVD called "Cookin' in Mobile." So we're mixing it up, and just playing it off the cuff. We call the songs as we're on the stage.

CV: We're a smaller town, and we often struggle to book national acts. What makes a city an attractive place for musicians to play?

RC: Well, it all depends if we get people to come out and see us – that's the most important thing. That's the way it is everywhere, basically.

RC: [laughs] I know there's something, I just can't think of it right off the top of my head. We've played in some weird places, really small, tiny little rooms, where one would think we would never play, but little small tiny clubs in Europe and places like that.

CV: You're often cited as an important link between the first wave of popular blues guitarists – guys like Muddy Waters and John Lee Hooker – and the newer generation of players like Joe Bonamassa and Johnny Lang. What do you feel you can pass on to these younger players based on your experiences with these elder statesmen of the blues?

RC: I've had the good fortune of playing with a lot of the names you mentioned, and it's great to get that first-hand experience. But then again, we've been doing our own thing, and my influences are from those elder statesmen, and women, as well as things that I grew up with – which includes some jazz, and gospel, and rock and roll, and soul music, you know, all kinds of things. We mix it all up and try to call it our own.

CV: Besides those younger guys I just mentioned, who do you think will be among the next wave of guitarists to carry the torch of the blues into the 21st century?

RC: He is, he really is. He's the guy everybody's looking at right now, so that's really cool.

CV: I've read that you had a lot of exposure to Jimi Hendrix during the time you spent in the Pacific Northwest. Based on what you saw and heard, why do you think he's still looked up to by so many musicians?

RC: I think when he arrived on the scene, he completely changed the way people looked at the guitar. I'd been playing guitar for 3 or 4 years by the time he made the scene, and [people asked] "Where did he come from?" I don't think there was anybody that preceded him in that fashion. I mean, when you listen closely to the music, you can hear a lot of the blues, and you can hear Curtis Mayfield, and the soul thing. He took it, put it all together, and invented his own style; it was really unique.

CV: People have been proclaiming the death of the blues for some time now, but it continues to persist. Why?

RC: Because the basic groove of the music is in everything we listen to these days. It's the basis for rock and roll, and you can't deny that.

CV: What do you consider to be the highlight of your career thus far?

RC: I don't know that there's just one. There's been a lot of great opportunities that we've had over the years. Getting the chance to play with John Lee Hooker and Muddy Waters and Eric Clapton and the Stones, and on and on and on, and getting the feel of those people too. They've all been highlights.

CV: You've done a lot of things as a performer – playing with legends, playing legendary venues. What's the one thing you would still like to do as a musician that you have not yet done?

CV: It's been a while since you released "This Time," in August of 2009. Although you released the live CD/DVD "Cookin' in Mobile" in July 2010, do you have any plans for a new studio album on the horizon?

RC: Yeah, we do. We're going in to the studio in March, and we're hoping for a September release.

CV: What are you listening to right now?

RC: Actually, I'm writing, so I'm not really listening to a lot of stuff, so I don't get influenced by what's on the turntable right now.

CV: A lot of people don't know that you were the uncredited bass player in one of the most iconic movie scenes of all time [The Dexter Lake Club, with "Otis Day and the Knights," in "Animal House."] How did that come about?

RC: I was living in Eugene, Oregon, and that's where we started the band back in '74, and a lady came up to me after one of our club dates and asked me if I wanted to be in a movie, and I sarcastically said "Yeah, right." And she took that for a yes. A couple of months down the road, I got a call asking if I could make rehearsal, and I did, and then the next day we were on the set, or several different sets for the next three days.

Free Public Panel on Discriminatory Banking and Housing to Be Held

by Kimberly Firestine3/2/2021, 3:52 PM
The virtual discussion on March 4th will address redlining, banking, and housing