Queens of the North 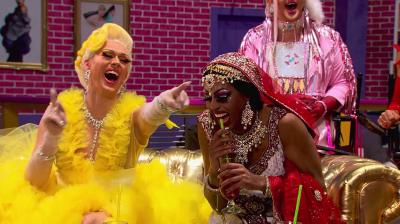 The Canadian iteration of Rupaul's Drag Race ended its first season on September 3. Before we get to the new Queen of the North, here's a fair warning that some slight spoilers are ahead.

Back in July, Canada's Drag Race started streaming on Wow Presents Plus, a streaming service of all things Rupaul's Drag Race. Twelve contestants from all across Canada strutted into the workroom to join the pantheon of RuGirls that continues to grow internationally (Drag Race Holland and Drag Race Australia are next).

The Queens of the North proved to be worth the wait. From the first episode, it was clear that it was an eclectic group of queens. All different styles and reputations of drag are represented from pageant queens and YouTube Gurus to Canadian indigenous queens and circus queens. Drag Race continues to further visibility for different types of drag, and effectively showcases their talents. Fan favorites like Priyanka, current New York City native Jimbo, and Lemon stole the screen with their quick wit and star power personas. Jimbo in particular captured hearts with her bizarre style and quirky personality.

While the competition was tight, ironically the panel of judges faced the most critiques. Canada's Drag Race is hosted by judges Brook Lynn Hytes (A U.S. Drag Race runner-up) and models Jeffery Bowyer-Chapman and Stacy Mackenzie.

After some unfavorable critiques, Chapman came under fire on social media. Fans were angry at his critiques and have accused him of inconsistent feedback, body shaming, and general rudeness. This then presented a problem within the RPDR fandom. Queens or judges that face criticism for how they are portrayed or the decisions they make are blasted and "canceled" on social media. Hate messages and death threats can pour in and run victims like Chapman off social media. Here, it is more important than ever to remember how to politely disagree and not take a reality show too seriously.

Canada's Drag Race put a new spin on staple challenges, casting an enchanting group, and delivering a nail-biting finale right until the queen was crowned. With a legendary season in the books, we can only sit back and wait to see what the next international season will deliver. — Michael Mongera