by Hannah McDonald
View ProfileLinkedInRSS Feed
February 27, 2019 at 10:15 AM 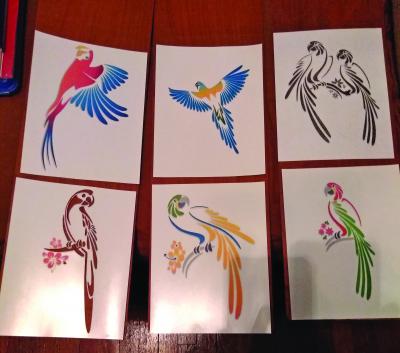 Seven years after Blue Sky Studios' Rio, featuring a macaw that traveled 2,000 miles to save his species, the blue-hued Spix macaw was declared extinct in the wild.

Erie resident Robin Sacks has a personal connection to birds, macaws specifically. Until December, he was the owner of a scarlet macaw, a no less beautiful but still extant species. Before the beloved pet passed away, Sacks visited Tamarack Wildlife Rehab Center to get medical care for his bird. Despite Tamarack's best efforts, Ms. Scarlet passed away just before Christmas.

"Four days prior to her dying, I thought we'd do something nice for Dr. Raymond," Sacks said, referring to the vet that treated the macaw. In those days, Sacks and Ms. Scarlet sat together and created six wooden carvings of birds. Ms. Scarlet picked out the pictures, Sacks said.

After the death of his beloved pet, a friend of Sacks suggested he do something in honor of the bird and give back to the nonprofit that helped her. Taking charge, Sacks met with Tamarack's executive director and principle licensed wildlife rehabilitator Carole Holmgren, Wayward Tattoo, and U-Frame It to get these wood pieces and three paintings by Johnny Matters and Luke Powers ready to raffle.

It "kicks off the first of March and goes until the last Friday," Sacks said. Tickets for set A, which consists of the wooden carvings, will be available at Animal Ark Pet Hospital. Tickets for set B, which consists of two paintings by Matters and one by Powers will be available at Animal Kingdom Pet Hospital. The drawing for the Animal Ark prizes will take place noon on March 29, followed closely by the Animal Kingdom drawings.

Sacks made it clear though that tickets can be purchased by calling or emailing him and that, "You don't have to be present to win!" — Hannah McDonald