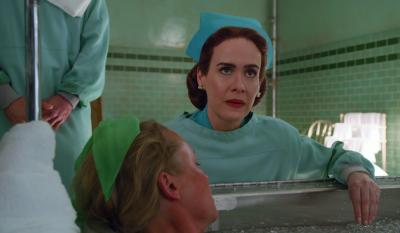 Netflix
Sarah Paulson stars as Nurse Mildred Ratched in the Netflix series based on the infamous antagonist of the novel and movie One Flew Over the Cuckoo's Nest.

Infamous cinema villain Nurse Ratched gets her own backstory in the new Ryan Murphy series Ratched.

Ryan Murphy has added another project to his juggernaut list of shows, which include American Horror Story, Glee, 9-1-1, and The Politician. His usual strengths and faults are on full display in Ratched. Sarah Paulson stars as Nurse Mildred Ratched, the unforgettably indomitable antagonist of One Flew Over the Cuckoo's Nest.

Like any Murphy affair, it starts off with a promising concept, strong aesthetics, and an excellent cast. Sharon Stone, Cynthia Nixon, and Judy Davis grace our laptops and Rokus, chewing up Murphy's hearty scripts like a mallrat chews up bubblegum. A beautiful shade of teal sweeps the entire main set of Lucia State Hospital, where Murphy holds no punches with the semi-accurate depictions of mental hospital procedures from the 1950s. It's close to AHS: Asylum, just with less darkness and Catholic guilt.

With that comes the show's faults, as Murphy has a knack to favor glamour over coherent storytelling. At times, plot narratives seem rushed and produce episode cliffhangers with little payoff. That's not to mention character arcs that seem directly recycled from American Horror Story (check the parallels of Freakshow's Dandy Mott and Gloria Mott with Ratched's Henry Osgood and Lenore Osgood, respectively).

I must confess something I never thought I would admit. I was not sold by Sarah Paulson's performance. Paulson is arguably Ryan Murphy's greatest asset next to the likes of Jessica Lange, Kathy Bates, and Angela Bassett. However, her performance feels more like an audition tape without ever fully embodying Louise Fletcher's Oscar-winning iciness that built Nurse Ratched's legacy. While we must give the perception of a character backstory the benefit of the doubt, the frigidness of Paulson's characterization is more so reminiscent of her American Horror Story: Apocalypse character, Wilhelmina Venable.

There's plenty of good here — engaging and sweeping visuals, almost reverberating off of the television screen, along with crucial LGBT character representation — Cynthia Nixon portrays Paulson's love interest in the story, which reveals the tragic backstory of Ratched's character (a subplot that itself is a major stretch). But it's dragged down by Murphy's worst habits, including his ludicrous plot developments. His stylish setups may pull you in, but they're rarely worth the payoff. — Michael Mongera