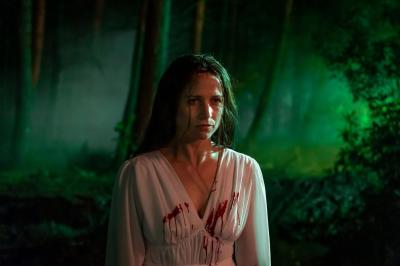 For time immemorial, self-proclaimed guardians of morality have sought to censor works of art, often in the name of protecting the children while real-life horrors were conveniently ignored. No other time best emphasized this dichotomy than the "Video Nasties" panic of 1980s Britain. Horror movies were heavily censored or banned completely for the "benefit of the youth" while socio-political and economic upheaval wreaked havoc on the country. Prano Bailey-Bond takes us back to those days with her directorial debut Censor. The film does a wonderful job of showing us that the desire for censorship often tells us more about the people doing the censoring than works they wish to ban.

Following Enid (Niamh Algar), a woman who takes pride in her job removing the blood and gore from recent horror films, but who herself has repressed a real horror from her childhood. However, these repressed memories suddenly come flooding back when she notices that an actress in one of the films bears a striking resemblance to her sister who disappeared years ago. Enid investigates this horror film which she thinks may be the clue to her sister's whereabouts. Or is it all in her head?

Although marketed as a horror movie, the film works much better as a character study. In fact, the dramatic scenes are so good that the horror elements almost threaten to cheapen the film. That said, there is much for horror fans to love as well with its contrasting colors straight out of an Argento film and its unsettling, surreal atmosphere. The mixture of horror and drama all leads us to an absolutely chilling climax.
— Forest Taylor