Rebuilding Erie One Tool At a Time

Honoring the legacy of Erie's builders, fixers, and tinkerers 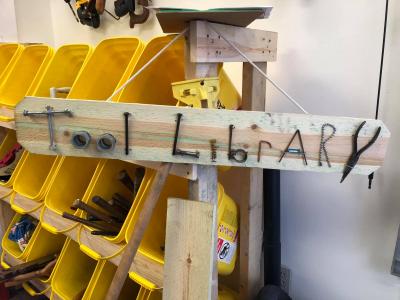 In starting The Tool Lending Library, I had no idea what to expect other than tools coming in and tools going out. From there I planned on playing it by ear, adapting to the needs of our community, and giving people the opportunity to interact with one another more while "giving neighbors the tools they need to build better neighborhoods."

What I have found, time and again, is that the majority of folks donating tools to this project have been sons, daughters, wives, and brothers of someone who had passed away; they were donating the tools of their loved ones to The Tool Lending Library because it felt like the best way to honor them while doing something with all of the tools they left behind.

One could say that tools nowadays are cheaply made, just like a lot of other things in our "throw-away culture." Though the tools donated by these family members may be old, they are still sharp and sturdy, and assuredly meant something to their owner who often etched their names into each tool.

These tools are priceless in their craftsmanship, well-taken care of by their owners for decades, and sometimes generations. They were built for a lifetime, but thanks to the care of their previous owner — and the thoughtfulness of their family — they will last and serve several more.

To honor their gift to our community, we are starting a mural at The Tool Lending Library that will feature select tools donated to us, engraved with the name of their loved one, many by their own hand.

My hope with this mural is to show the community the history of those things we value: be they tools to make things and rebuild, or the memories of our neighbors from long ago who built and rebuilt homes, families, and communities.

Based in Erie's Academy Neighborhood, but thanks to the generosity of so many, The Tool Lending Library has the capacity to serve each and every one of Erie's neighborhoods. Pop-up events across the city are being coordinated with other neighborhood groups, and year-round workshops on home, garden, and tool maintenance are in the works.

If you would like to make a tool donation in honor of your loved one, contact Jay Breneman at The Tool Lending Library by calling 814-490-6872. More information can be found online at facebook.com/ToolLendingLibrary

Jay Breneman, 36, is a member of the Placemaking Leadership Council, teaches coursework on policy and community development at Case Western Reserve University, and serves as the Director of Community and Government Services at Strategy Solutions, Inc., helping clients create healthy communities nationwide. He lives in Erie with his wife and their three children.

In All Seriousness Country Music Mayhem: "Killing Me Softly"

Music of the Knights