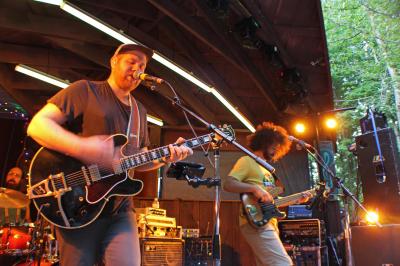 The internationally known band Wild Adriatic will provide an evening fueled with two heavy-hitting setlists that blend the sounds of '70s rock 'n' roll and Motown soul. Now in their eighth year of touring, they're making a stop in Erie during their busiest year yet to provide a next level live performance for everyone to groove to.

Drummer Mateo Vosganian says, "we love this ... we're just normal dudes who are lucky to be supported by fans who buy tickets and come out to shows, and we like to hang out with them. We aren't trying to take ourselves too seriously. We're trying to connect. We're trying to feel."

The well-established trio from Saratoga Springs, N.Y. has now added three more members to recharge the band with a fresh perspective. Along with their guitar-heavy swagger, the addition of two saxophones and a keyboard helped to add depth to the band and infuse soul into their setlists.

In the midst of completing several European and multiple stateside tours as well as appearing at festivals such as Bonnaroo and the upcoming local Spring Badfish (in nearby Garrettsville, Ohio), they recently completed a five-song EP. Adriatic/Rodriguez came to be after Minneapolis-based singer/songwriter Dan Rodriguez and Vosganian spent three days writing and recording after a late night, drunken conversation together. With songs like "Don't Hold Back" and "Party," the spirit of the band shines through and exemplifies the mission that the band is trying to accomplish.

In addition to their brand new EP, the band embarked on a month-long tour with their musical partners-in-crime Andy Frasco & the UN. They also will assist in bringing the heat this summer as they are performing with the legendary Lynyrd Skynryd as a supporting band on their farewell tour.

This acclaimed band is not one to miss as they make their way through the United States during the quickly approaching festival season. — Symoné Crockett

ticket sales at the door on the day of the show, cash only