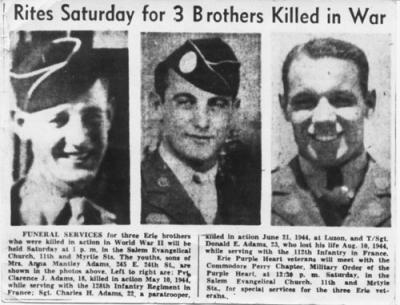 An old clipping of the Adams brothers from the Erie Times.

August 14, 1948 was a solemn day of homecoming in Erie County. The remains of three brothers – Charles, Donald, and Clarence Adams – were laid to rest at Erie Cemetery following full military services at the Salem Evangelical Church, formerly located at 11th and Myrtle. In 1944, mere weeks after U.S. forces stormed the shores of Normandy on D-Day, Charles and Donald died within a month of each other while serving their country in France. About a year later, their younger brother Clarence would also give his life during combat on the island of Luzon in the Philippines.

In addition to acknowledging the sacrifices of the Adams brothers, the 1948 service also paid tribute to their mother, Anna Mentley Adams. The scale of this tragic loss made her the only triple Gold Star Mother in the region.

The Gold Star Mothers club was formed in the wake of World War I to honor the women whose children died while defending their country. The name refers to the Service flags that became a familiar sight in the front windows of American homes in the 1940s. The flags contained a blue star for each family member actively serving in the armed forces. When a soldier passed away, the blue stars were covered over with gold ones, indicating that the family had made the ultimate sacrifice.

By the end of the war, the flag adorning the Adams' home on East 24th street was an ominous reminder of the conflict's devastating toll. After the war, Anna Adams helped form an Erie Chapter of the Gold Star Mothers, which was named the Adams Chapter in her honor. She even briefly served as its first president prior to her death in 1949, only a single year after the service to her sons.

Nearly 70 years later, the legacy of World War II and its casualties still resonates in the local community. For the past fifteen years, retired accountant Don Adams (no relation to the brothers) has been tallying the impact of the war in Erie County with help from his brother-in-law, Ray Fitzgerald. Adams, who served as a cryptographer in Alaska during the war, established an online database to tally the total number of lives lost in our community. There are 727 deaths according to his records.

I asked him why remembering local people like the Adams brothers is so important, and he answered with an interesting analogy: "Today, World War II is as distant in history for the youth of today as the Civil War was to the youth of the World War II era." That's no exaggeration – the comparison makes mathematical sense. A nine-year-old child in 2014 will grow up with exactly as much distance from the invasion of Normandy as a twenty-year-old on D-Day had from the Gettysburg address.

In addition, the veterans of the Second Great War are disappearing rapidly. According to figures recently compiled by the National WWII Museum in New Orleans, just over one million of the estimated sixteen million Americans who served are still living. In Pennsylvania, that number is 55,853.

As time passes and the war becomes more distant, the need to remember becomes more urgent. So who were the Adams brothers, exactly?

Donald E. Adams was the oldest of the three who gave their lives, a veteran of the National Guard Service who left Erie in November of 1941. He was an Academy High graduate who attended Norwich University prior to leaving for war with the 112th Infantry. He was a talented football player in his school days, which helped him earn a scholarship for college. In the Army, he rose to the rank of Technical Sergeant and was awarded a posthumous Bronze Star for valor. On Aug. 10, 1944, during fighting near the town of Gathemo in France, Donald lost his life at age 26.

Charles H. Adams, a graduate of Technical High School, was also called to duty with the 112th infantry in 1941. Soon after, he volunteered for the 101st Airborne Division and was trained to be a paratrooper. In the service, he rose to the rank of Staff Sergeant. While stationed in England, he briefly met up with his brother Donald prior to heading for France to take part in the Allied invasion of Normandy. He lost his life in the conflict on June 21, 1944, just fifteen days after D-Day. At 22 years old, he was the first of the brothers to give his life in service.

Clarence was the youngest of the eight siblings that made up the family. His friends called him "Honey," which was a shortened version of "Honey Schlau," a nickname used affectionately by his German mother. Ray Fitzgerald attended Academy High at the same time as Clarence and remembers him as a track-and-field star, one who "had long hair before long hair was in style."

A few weeks after the death of his brother Donald, 18-year-old Clarence decided to enlist. According to family accounts, he did so voluntarily – despite the fact that the Adams' losses qualified him for a deferment. By the spring of 1945, he was on the island of Luzon the Philippines, helping to stabilize cities seized by Gen. Douglas MacArthur's forces.

In mid-April, he was assigned to the 32nd division of the 128th Infantry, also known as the "Red Arrow Division." The unit was working to secure the Villa Verde Trail from attacks lead by the Japanese Fourteenth Area Army. Clarence had little combat experience – and insubstantial time to develop bonds with the other soldiers. On May 10, 1945, he was shot and killed while his platoon was on patrol. The event occurred about a month after his 19th birthday, and only a few months prior to Japan's official surrender.

Donald, Charles, and Clarence had four older brothers, all of whom served in the National Guard. Harold Adams joined in the 1930s and was, according to family records, one of the responders to the Great St. Patrick's Day flood of 1936 in Pittsburgh. He was drafted for the war at age 35, but was eventually discharged due to a heart murmur. Richard Adams also served during the war, but was never stationed overseas. Arthur Adams was the only brother who didn't actively serve, due to a deferment prompted by a problem with his legs.

Two members of the family lived into the 21st century. Leona (Adams) Hunt, the only daughter of Anna Adams, passed away in 2005 at the age of 95. Robert K. Adams also passed away in 2005, a few years after he became the subject of a feature in the Erie Daily Times about his service in the war and his brothers' legacy.

Reporter Bill Welch became fascinated by the story of the Adams brothers while conducting research prior to the dedication of the Erie County WWII Memorial in 1999. During his tenure as a city editor for the paper, he conducted multiple interviews with Robert K. Adams, who spent his final years at the Pleasant Ridge Manor nursing home. During their conversations, Robert recalled his own unique war experiences as a rifleman in the European theater.

In the interviews, Robert recounted active duty with two regiments. With the 112th he served in Le Havre, France. Later, when replacements were urgently needed during the Battle of the Bulge, he was transferred to the 110th. With the new regiment, he endured a bitter cold winter at a smaller bulge known as the Colmar Pocket in the Alsace region of France. As the winter thawed, they pushed forward to Germany.

Though these experiences may sound heroic, when Robert returned home from the war he was overcome with grief, not pride. According to Welch, "he felt so guilty because he survived and his brothers didn't." During their conversations, Robert spoke frankly and eloquently about that guilt, which prompted the reporter to make an extended version of his moving story available online. The article adds substantial intimacy to the Adams brothers' story, and features many intimate details pertaining to everyday life during combat.

When I spoke to Welch, he noted the degree to which testimonials like Robert's are disappearing because "every day you're losing people that could have helped you." Though the consequences of age are inevitable, we can still play an active role in preserving and remembering our history.

The story of the Adams brothers is often recalled by genealogist Caroline Reichel, who leads guided walking tours through the Erie Cemetery throughout the summer and early fall. The family's remains are located in Section 8 of the cemetery, and the three brothers who lost their lives are honored at the Erie County World War II Memorial, located at the corner of State Street and Glenwood Park Avenue.  Finally, though service Flags are no longer a familiar sight in Erie neighborhood windows, the Gold Star Mothers – Erie's Adams Chapter included – are still honored each year on the last Sunday of September.

To learn more about Caroline Reichel's walking tours of the Erie Cemetery, contact her at 814. 868.4423, or at caroline.reichel19@gmail.com