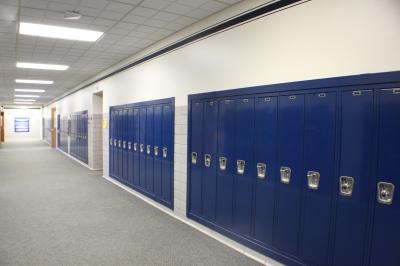 Nick Warren
While class is in session, the hallways of McDowell High school are still as students are about to file in on their way to their next period.

When I was in my freshman year of high school, we had a hard lockdown. Many of my friends who were in other classes at the time thought it was a drill. The people in my classroom and I knew otherwise. It was fourth block, the last block of the day. I was in history class, my favorite class, on the second floor. My friend raised his hand to ask if he could go to the restroom, signed out, and took a pass. Moments later, he came back into the classroom. I remember a classmate laughing, asking why he came back so soon. Not laughing, he replied, "There's a kid with a gun out there." Everyone in the classroom was now listening. Some kids chuckled, thinking our peer was joking. Nothing like that could possibly happen at McDowell. It could happen at other schools, but definitely not ours. Other children, like myself, froze. Regardless of our different reactions at his comment, a morbid sense of unity washed over us as an announcement went over the PA system a few seconds later, announcing to us that there was an active shooter, and we were all to go into a hard lockdown immediately.

When I was thirteen, a year before going into high school, a man named Adam Lanza killed his mother and went into an elementary school in Connecticut and killed 26 children and teachers before killing himself. I was shocked to my core. The name "Columbine" floated around in my head. It was an event we learned about as a tragedy in American history, but was now suddenly a reality years later. I remember going home and watching the news, but having to turn it off before my brother, who is three-and-a-half years my junior, came home from elementary school. My parents didn't want him to see the news. They were afraid that it would frighten him. When he came home, I looked at him and had to go into a different room because I remember imagining in that moment what it would be like to hear that it had been Chestnut Hill Elementary in Erie, Pennsylvania instead of Sandy Hook Elementary in a small town in Connecticut.

In 2018, at least 239 school shootings after Sandy Hook, the Parkland shooting occurred on February 14th. This time, I was not shocked to my core. This time, I did not turn off the news to hide my brother from the horror. This time, he found out on his own. This time, instead of tip-toeing around it at home, we didn't talk about it at all. We have become so desensitized to the latest school shooting that, if the survivors of the Parkland shooting had not mobilized in the way they did, I would likely have forgotten the name "Parkland" and its significance altogether by now. But they did mobilize. Not only do I still know the name of the town this shooting took place in, but I also know the names of Cameron Kasky, David Hogg, Sarah Chadwick, Jaclyn Corin, Delaney Tarr, and Emma González. They are students, survivors, and activists from Marjory Stoneman Douglas High School in Parkland, Florida. In the days to follow the shooting, they—along with their other classmates—were ridiculed for mourning "wrongly," for taking to social media to let their stories and opinions be heard, and some were even ridiculed for taking pictures and videos in the school while the shooting was occurring and in the time that followed. The last part is one that sparked a lot of discussion the next day at my school. A lot of people wondered why on earth would these students record such a thing. Part of me is very glad they did, though. If they had to live through that, we all should too.

The day after, my friend texted me and asked what my thoughts were on the shooting. Thoughts swirled in my mind, ones of gun reform, our poor mental healthcare system, the culture of violence we live in, and many more. Through all that, though, one thing weighed the heaviest. It was my mom's voice. The sound of her voice on that day years ago, on the second floor of my high school, when my back was pressed against a bookshelf, and I held my phone to my ear as my hand trembled. I had called my mom after the hard lockdown was announced, and just as we practiced every year for as long as I remember, we turned off the lights, closed the door, and huddled in the corner furthest from the door. I had just told her that my teacher was telling me to get off the phone, because the shooter might hear my voice or see the light coming from my phone and my teacher was right, but all I wanted in that moment was to hear my mom's voice. I listened to my mom cry and scream into the phone at me as I kept telling her goodbye. "Do not hang up on me, Morgan. You're not allowed to hang up this phone. You stay on the phone, do you hear me?" I said goodbye to my mom, and hung up the phone, not knowing whether or not it would be the last words she would hear come out of my mouth.

The student who caused the lockdown ended up only having an airsoft gun with the tip painted black to imitate a real gun. The lockdown made news and was spoken of for months after. Some kids shrugged it off, but for others that wasn't such an easy thing to do. I know friends who have nightmares and anxiety attacks about it, even years later. I will never forget the sound of my mom's voice that day. She picked me up from school and I can still remember what it felt like to feel her hands shake on my head as she held me to her chest. I know that my family and I are lucky, because when I said goodbye to my mom that day in freshman year, it wasn't the last thing she heard me say. I know that this is not the case for every family out there. I know that 17 families in Parkland, Florida are mourning right now because even after Sandy Hook, not enough has been done to prevent mass shootings. This angers people, as it should. People across the country are frustrated because they don't know what to do.

Listen to these kids. Listen to Cameron, David, Sarah, Jaclyn, Delaney, and Emma. Listen to all their classmates, teachers, and faculty. Listen to my classmates who, after the shooting, said they didn't want to go the basketball game last week because it would be an ideal location for a shooting. Listen to the survivors and families of victims of the Sandy Hook and Columbine shootings, and all other school shootings that have occurred. Listen to my mom, a parent who got a call from her kid saying there was a shooter in her school. No student, teacher, or faculty member deserves to feel unsafe due to the threat of gun violence that is present in schools all across the nation. And to any and all politicians who don't proactively work to make schools a safer place because it puts more money in their pocket, just know that children grow up to become adults who are capable of voting you out of office, and we will. We matter, we have a voice, and we will be the change.

Morgan is currently a senior at McDowell High School. She helped to spearhead McDowell's participation in the National School Walk-Out on Wednesday, Mar. 14, for 17 minutes starting at 10 a.m. The peaceful demonstration will be also be taking place at most schools in the Erie area and throughout the entire United States. #nationalschoolwalkout