"If you ask Roy what his treatment is currently, he'll tell you with convinction, 'Hope.'"

by Matt Flowers
View ProfileFacebookTwitterGoogle+RSS Feed
October 16, 2013 at 8:06 AM 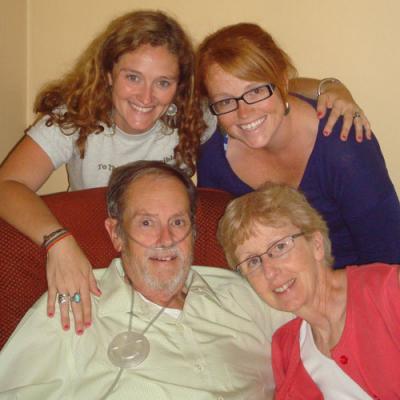 The sound of ventilated oxygen makes a low whistle in the living room. Feed lines from the iron casks stretch across the living room floor like a wrinkled crease in a sheet of crisp paper, snaking up to a flat plastic reservoir the size of a sand dollar, which breaks the path of tubing in two, after one last zag, they're secured in both nostrils, breathing life into a man's struggling set of lungs.

His house is warm from decades of love, insulated by serene Sunday mornings, long talks of so little and so much, and holiday celebration, but a chill resides in the air. In the way you can feel winter in a fall day's breeze, the cold, clinical hardware, be it the plastic oxygen lines that stream from room to room, the wheelchair accessories, or the heavy metal track running up the staircase, there is sterility in the air like a waiting room.

Roy Glass is 67 years old, transplanted in Erie at the early age of 5. He is a successful small business owner. For nearly 40 years Roy has been the workaholic behind the Silkscreen Unlimited doors, a storefront almost all of Erie recognizes as the corner shop on Eighth Street and Lincoln Avenue. That blue awning with a tall-hat-donning caterpillar is an Erie landmark.

Roy is also a family man; he is the husband to Cindy Glass and a father to his two daughters, Courtney and Lindsey. He is also somewhat of a philanthropist, driving Erie forward by donating and supporting a list of organizations as long as the interstate. If you don't know Roy, you've passed his store or you've seen his T-shirts, and if you do know him, you recall the tall, healthy, heavyset man, equipped with a jovial smile with that small gap between his teeth and voice that held the room.

But you also might know the battle he is fighting.

Amyotrophic lateral sclerosis is an unweatherable storm, and Roy is in the heart of it all. But this story is neither a eulogy nor is it breaking news; it's about a man in this war of body and mind, and those who are meeting him at the epicenter.

ALS is a thieving disease, indiscriminate, and merciless. The disease progresses quickly, its debilitating effects are noticeable by day, like watching a poisonous weed grow overnight from a pestilential little sprout to a thorned, savage stock.

Also commonly known as Lou Gehrig's disease, ALS starts with weakness in the body, muscles slowly shutting down like a dimming light. Roy's arms are skinny now, the skin loose like a deflated balloon. While muscles weaken, body-wide tremors introduce themselves into the fusion of symptoms, a feeling Roy describes as, "an electric current." But amid the bodies withering and the voltaic fasciculations, this disease doesn't stop taking.

Roy's voice is diminished severely. He works tirelessly to communicate; inevitably, the words seem to come out in chunks. "The thing that was most shocking about [ALS] was my dad's speech. My dad has the most beautiful voice. It's like a radio voice. Just calm, sweet, and soothing." His daughter Lindsey notes about Roy's voice and the progression of the disease. Where the consonants and vowels cave in – with a voice like a crumpled letter, read only from the exposed edges of the stationary – his eyes seem to help convey that missing message in the words. It looks like it hurts to speak, but he wants to, he needs to. Roy lives through his speech, the way an artist splashes color on to canvas to find order in the world. "I don't want him to disappear. He is too vibrant a man," Lindsey says in a kind of mournfully determined voice, like a scientist on the cusp of an answer only more time would provoke.

But Roy won't disappear without leaving his mark.

"We go to our representative, and we ask for funding from the state to help us support our families," says Marie Folino, Care Services Director of the ALS Association's Western Pennsylvania Chapter.

The Association leads the way in research, care services, public education, and public policy — giving help and hope to those facing the disease. Roy received substantial aide from the ALS Association, from wheelchairs and ramps to talking devices and even emotional support. But he also helped them.

Advocacy is also a crucial component of The ALS Association's mission. Because they receive funding from the state – 100 percent of which goes directly to helping families affected by this disease – someone had to speak with State Senator Sean Wiley to ensure funds would be set aside to support victims of ALS. And who was that someone? Roy Glass.

Roy met with Wiley before the 2013 budget was passed to discuss the importance of the ALS Association and how powerful their inclusion into Pennsylvania's allowance would be.

While Roy and his family have accepted help – with great thanks – from the ALS Association, they have been scrupulous in their therapeutic support. There are groups in and around Erie that lend this kind of comfort and solace from a disease that is vicious and vile, but it wasn't the right fit for the Glass family.

"We've been selective in our support – to keep it all positive. We know where this will go," Courtney explains about the terrifying yet evident end stages of her father's life. "But we're making an active choice not to physically see it. At least until we have to."

Today, Rilutek is the only current treatment approved by the FDA for ALS. This centimeter-long, chalky white pill is expensive, costing upwards of $800 a month. Not only is it costly, but this medication provides minimal benefits: a two-to-three-month delay towards intubation and ventilation, which is then used to assist patients in spontaneous breathing. Roy has tried Rilutek, but side effects, like asthenia, nausea, dizziness, decreased lung function and diarrhea seemed to only add to the wretchedness of the disease. So he opted to battle out ALS without the help of that tiny white capsule, forgoing the expense and the bad reactions and forge ahead.

Moreover, the effects of the medications are rather inconclusive as the prognosis of the disease is a short two to five years. If you ask Roy what his treatment is currently, he'll tell you with conviction, "Hope." But it's nothing he takes alone.

It's audible in Lindsey's voice when she talks about her father, it's in Courtney's touch when she holds his arm when he speaks, and it's profoundly visible on his wife's face when she looks in his brown eyes. There is density in this word; this hope has become something almost tangible, as if Roy is holding it in his withered hands. It compels him to live and endure the waves of medical complications as they continue to crash in. In combination with ALS, Roy also suffers from diabetes, has recently gone through cataract surgery, survived pneumonia – twice as of this article being written – and blood clots in his lungs.

Amidst that tide of medical complications, doctors were continuously misdiagnosing the ALS, inadvertently wasting precious months of an already shortened stay. According to the ALS Association, the incidence rate of this disease is two per 100,000 people. Seeing as the population of Erie is barely hitting six figures, the chances of our hospitals treating this illness with any kind of efficiency is slight. Roy happened to be one of those two in 100,000 people and originally was seeking treatment at UPMC Hamot. However, after the treatments he received caused his condition to worsen, he and his family sought treatment at the Cleveland Clinical. Here, Roy was taken off the ventilator Hamot had concluded was the only option if he were to live.

Despite all this, Roy still sits tall in his chair. His strength is evident; while he may be frail, his legs frozen, arms lean, face slender, his presence still demands the attention of the room, and the sinew still adhered to his bones is an artifact of vitality. Over the time of this disease Roy's physical strength has turned to fortitude. He no longer demonstrates his disposition through long hours at Silkscreen Unlimited, but through quiet acts of courage, like each exhausting excursion to the hospital for emergencies, to the doctor for more tests, to physical therapy to maintain muscle, weathering each challenge so he can be here and his family can be whole. Roy does not deny the heartache and hardship of these trials or that the sorrowful knowledge of his end is a tough pill to swallow.

"Knowing death is coming my way is scary," Roy says slowly, his eyes big and sad above the plastic pipes leading to his nose. "I will be hiding in my mind… This disease destroys your body, but it does nothing to your brain."

Roy's past year and half has been a somber time, and yet he can still crack a whole hearted smile when the time is right. "I recently was baptized," Roy says gently nodding his head as if to affirm his recent decision. "I am totally at peace," he adds with his chest sinking as the air leaves his mouth, and smiles wide enough to show that small gap between his teeth, showing a piece of himself that will never change.

There is no circumventing inevitability. And reality can be unforgiving. They roll on to the horizon like a sweeping storm; a canvas of black and grey across the cold sky. Sadness can chill bones, the longing for a reply from beyond the blanket of blanched sky can be as strong as the seasons driving winds, seemingly only shy by a couple of knots to push the overcast aside. The pigment of the present turns dark and ashen like black and white photographs, bleaching and shading in the colors of life's simple freedoms: trivial conversation, your favorite meal, a Sunday drive. But in opposition to the rain that must eventually fall from these clouds for everyone, love from a caring family, help from close friends, a hope, like a fire steadily burning at the heart of a home, will stay lit until every ignitable wood sliver turns to dust.

If you'd like to help offset the medical expenses of a man who's given much to Erie, you can donate to an ALS Medical Care Fund established for Roy Glass through GiveForward here.