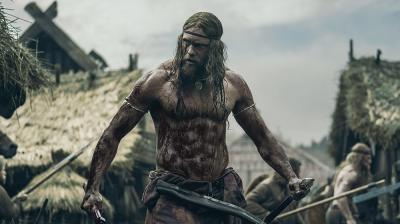 Robert Eggers has only directed two prior films (The Witch and The Lighthouse), but he can already be relied on for two things: obsessive attention to detail (including period accurate dialogue) and surreal, almost psychedelic visuals. So when I learned that he was given $90 million to tell a Viking revenge epic, my excitement could not be overstated. The Northman, while arguably his most mainstream and accessible film to date, is still full of Eggers' usual touches resulting in a fascinating and visceral tale of vengeance, destiny, and family that successfully bridges the gap between history and mythology.

Set in the 10th Century, the film follows Amleth, a young prince whose world is shattered when his father the king (Ethan Hawke) is betrayed by his brother Fjölnir (Claes Bang), who kills the king and takes his queen (Nicole Kidman) as his own. Amleth escapes and grows into a fierce warrior (now played by an almost animalistic Alexander Skarsgård) who now has a single goal in his heart: to avenge his father, save his mother, and kill Fjölnir.

Based on the possibly true (but probably fictional) Norse folk tale "Vita Amlethi," the film is filled with Eggers' historically accurate period details, giving us all the danger and brutality found in this world. However, Eggers is also interested in the rich mythology of the people presented, resulting in dreamlike sequences of spiritualism and mysticism. This combination of reality and myth turns Amleth's quest from a simple revenge tale into a surreal battle for the soul. Those looking for a mere action movie may be disappointed (although the film is not without its share of blood and fury) because as usual, Eggers is after something far grander than basic genre conventions. – Forest Taylor