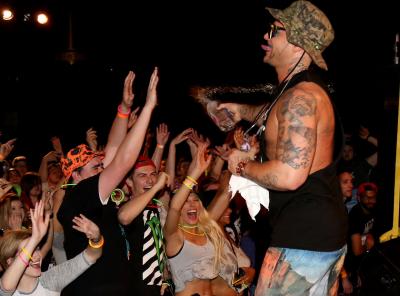 The Entertainment Collective is bringing RiFF RAFF back to Basement Transmissions after a three-year absence.

The Houston, Texas rapper has been making music for a little over 15 years now. This eccentric hip-hop mogul is the mind behind the songs "Tip Top Wing in My Jawwdinz" (2014), "Lava Glaciers" Ft. Childish Gambino (2014), "Only in America" Ft. James Franco (2016), and one of his biggest hits "Versace Python" (2017). He has also collaborated with the likes of Mac Miller, Mike Posner, Gucci Mane, and G-Eazy.

RiFF RAFF has recently been working on multiple studio albums and teaming up with even more well-known artists and producers such as Chief Keef, DJ Paul, and Diplo. His most recent studio album is Cranberry Vampire. This album features his signature blend of hip-hop and trap beats with tracks such as "Butterscotch Babe Ruth" and "For The Paper." Other songs include new electronic tones, such as "These Eyes" and "Bring It Back To Me Baby."

The supporting lineup for the evening will include all local talent, in the form of JODO, Ducky, Brand-Nu, and Cobra $hins. Meet-and-greet opportunities with the Cranberry Vampire (RiFF) himself are also available with the purchase of VIP tickets. Whether you were at the first show or not, this will be a throwback performance you will not want to miss. Come check out both the old and the new styles of the "Neon Icon." — Symoné Crockett