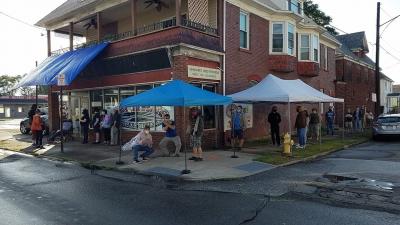 Contributed Photo
Record Store Day shoppers line up around Graham's Record Store, located at 613 W. 26th St. in Erie, originally got its start in Edinboro in 1985. It continues to aspire to be a one-stop shop for physical media in the form of vinyl, cassettes, and CDs.

Record Store Day is the most anticipated day for vinyl lovers and independent record stores across the country. It's a day when musicians distribute vinyl records in the form of collector's items, numbered pressings, and first releases which are sold at independent record stores throughout America and Europe. Traditionally RSD (as it's called amongst vinyl enthusiasts) occurs on the third Saturday in April, however, much like everything else in 2020, the COVID-19 pandemic caused the 22nd Annual Record Store Day to be postponed. In the hope to limit the crowd sizes at independent record stores the organizers decided to split the release into three separate days, with one day in August (Aug. 29), a day in September (Sept. 26), and one in October (Oct. 24), along with the already planned Black Friday Record Store Day on November 27th.

Record Store Day is as important to the buyer as it is the store owner. These limited releases will draw some of the most die-hard vinyl lovers out of the woodwork, along with attracting those new to collecting. Traffic influxes at niche stores help keep these businesses running. The hope is that people come for the limited releases and end up spending more time and money on some of the store's other offerings. Michael Graham, from Graham's Records, said that his store wouldn't be doing as well as it is if it wasn't for Record Store Day. "The existence of RSD has raised the public perception to expand and grow with the ability to generate interest in the media," said Graham.

Graham's Records, at 613 W. 26th St., is Erie's only locally owned independent record store that hosts Record Store Day. Graham's was founded in 1985 by Michael's brother Steven and their mother, Margaret. Graham's Records was originally located in Edinboro before moving to its current location in the heart of Erie. Graham's is a one-stop shop for music in the form of physical media. They have a wide selection of records, CDs, cassettes, and even a few DVDs — however, vinyl records remain their specialty. If you can't find that rare album you are looking for, Michael will check his extensive warehouse; if you are looking to experience a newer release differently, he can special order it for you.

The appeal of listening to records goes beyond your parents waxing nostalgic while listening to AM favorites from their youth — many modern artists are releasing their music on vinyl as well. One of the most anticipated releases this Record Store Day was Billie Eilish's *Live at Third Man Records, featuring Eilish and her brother FINNEAS in a live acoustic performance. The performance was recorded direct-to-acetate at the Nashville studio owned by musician and vinyl preservationist Jack White last November. It was pressed on opaque blue vinyl and includes a limited edition poster. There were only 17,000 made worldwide and even though Graham's had several copies in store on Aug. 29, they quickly disappeared. Graham states that "thanks to Record Store Day and their online presence, the younger audience is getting into record collecting." Record Store Day offers other releases throughout the year, making many available exclusively at independent record stores. It's all part of the goal to draw people into the locally owned stores and help build the fanbase that will continue to visit these shops.

With the restrictions in place due to COVID-19, the setup and feel were different compared to previous years. Vinyl shoppers traditionally line up as early as six in the morning, talking about their collections and what they hope to grab on Record Store Day; now customers must remain six feet from each other. Additionally, instead of opening the doors and letting shoppers loose in the store to grab the releases they want, which are usually placed around the shop like a vinyl Easter egg hunt, customers are required to wait in line while an employee asked them what they were looking for, making it a first-come, first-serve scenario.

In years past, you could grab as many releases as you could hold. However, with social distancing in place and in fairness to everyone waiting in line, there was a purchase limit on the special releases in 2020. If you wanted more of the limited records, you had to go back to the end of the line and hope that the release you wanted was still there. Graham said " customers were overwhelmingly positive towards the restrictions and guidelines that were set in place" and added "most seemed relieved that there were precautions taken."

Graham's Records will open at 9 a.m. for its next Record Store Day event on Oct. 24. However, remember that the line starts early, usually around 6 a.m., and sleep-deprived vinyl enthusiasts geared up with excitement will be there waiting with coffee in hand. So show up early, build your collection, and most importantly stay safe.