What would happen if all crime was legal for one day? "The Purge" takes a stab at that question. 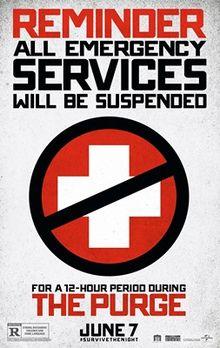 "The Purge" is a rather ugly film, bearing bleak, world-weary implications of the society in which we live. Its conceit is that a group called the "New Founding Fathers," who apparently preside over the U.S. government, have instituted a nationwide "Purge," wherein for 24 hours, murder is legal throughout the nation. Are these founding fathers a cult? A new government? We have no idea – just that apparently everyone takes advantage of the Purge in droves.

Enter James Sandin (Ethan Hawke), a security system salesman who lives with his family in happy suburbia, where all the neighbors are satisfied buyers of his product, readying themselves for the big day. Though he doesn't participate himself, Sandin has convinced himself, as has the TV news stations which play in the background of several scenes, that the Purge is good for society, that crime levels have gone down, and that there's been a huge economic boon since its institution. But when Sandin's shut-in son (Max Burkholder), apparently the only one in the movie with a basic sense of morality, briefly shuts off their home's security system to let a homeless man inside the house, a group of mask-wearing college kids show up at the family's doorstep, grinning like crazies, asking for the family to release the man, their target for the evening, to them or they will destroy the house and kill them all. These nutjobs mug for the security cameras posted all around the house, flaunting their insanity and thanking the Sandins for their participation in a new American tradition.

That's right, apparently everyone – your friends, your neighbors, your local school kids – are all murdering psychopaths feigning normal domestic life, lying in wait for the one night they can legally take the lives of their fellow man.

This is a concept I don't buy. "The Purge"  purports itself to be posing some profound ethical question of us, yet in my mind, there isn't really even room for debate here. Not only would this "Purge" never happen from a realist perspective, but it would never erupt to widespread use, and certainly wouldn't make things "better" economically as the film claims. We know violence begets more violence. Psychology tells us it's better not to let our anger out violently, as it will only make us more violent people. Given that leap forward in collective psychology…what's the film's point again?

You could argue that the film's conceit is derived from literature, specifically Shirley Jackson's "The Lottery," but the film simply doesn't have the storytelling chops to back up its claims.

Indeed, "The Purge" has some big, bold ideas to say about the inherent violent nature of humanity, but with some utterly TV-budget scripting, the message isn't clear. By the film's end, the family has endured great loss, concluding with the message that: Yes, the boy was right to save the homeless man at the beginning, and that we must act to preserve the lives of our fellow man in need regardless of personal cost.

That's all well and good, but one has to ask…if the kid had just kept the security system on and not gotten involved, none of that pain would've come to the family in the first place. So…wouldn't it have been better for them to just not do anything in the end?

Even some of the antagonists don't really get the justice they truly deserve. Are we supposed to be angry at this? Who should I be directing that anger towards? The New Founding Fathers, for essentially protecting murderers by law? Why should I be angry at something that doesn't even exist? Shouldn't the point of this movie be to warn against anger and violent behavior in the first place? Furthermore, is this movie supposed to be a commentary on society today? By setting the film in near-future 2022, is it arguing that a nation-wide "purge" may be in our future? Why can't I reach into the screen and tell everyone in this movie to just chill the f--- out already?

At least there's some amusingly inane dialogue to provide unintentional comic relief. One scene sees the crazed college kids start coming into the house, when Sandin's wife Mary (Lena Heady) cries out, "They're coming into the house!" Immediately afterward, Sandin gives his son a gun, to which his wife helpfully informs him, "You just gave our son a gun!" Yes, thank you movie, we just saw both of those things happen. I appreciate the help, though. Any time I go blind and need someone to narrate more straightforward onscreen events for me, I'll let you know.

There's also plot threads that go nowhere, characters that randomly disappear because the script doesn't need them (seriously, what parent lets their teenage girl wander off for no reason when there are potential killers in the house?), and cheap jump scares throughout to compensate for a general lack of tension, all of which amount to a lazy thriller and a thoroughly lackluster summer blockbuster.

I'll direct you to the climax of 2008's "The Dark Knight", wherein the Joker (Heath Ledger) has two boats rigged with explosives, one a prison boat, the other filled with civilians. Both boats are given a small device with a button, which one boat must push to blow up the other boat, which will save them from being blown up themselves. They have until midnight to decide what to do, or if no one blows the other one up, both boats will blow up. After midnight (five-year-old spoiler alert), neither boat blows up. Essentially, when it comes down to it, humanity as a whole would rather die than murder people they don't even know and live with what they've done. It's a powerful sequence that some see as hokey; I see it as illustrating that little thing called a  conscience in all of us.

"The Purge" would have us believe that in that same scenario, we'd be falling all over each over in a mad dash to hit that button and kill everyone onboard the other boat.

I'll take the former, "hokier" of the two any day of the week.