The revered satirist/columnist/pianist remains as sharp and insightful as ever. 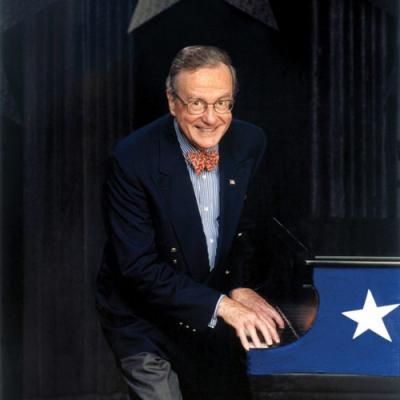 The U.S. political machine is like a player piano, cranking out a ready-made soundtrack for satire on a continuous loop. Someone or another is always stirring up a rumpus down at the saloon on Capitol Hill (and/or the White House), and on the cusp of one of the most polarizing elections in American history, the West is wilder than ever. Amidst all the hootin' and a-hollerin', the flying bottles and upturned tables, Mark Russell has never lost the tune of the Entertainer.

The revered satirist/columnist/pianist remains as sharp and insightful as ever after over 60 years of keying in on politicians and proceeding to hammer them.

The revered satirist/columnist/pianist remains as sharp and insightful as ever after over 60 years of keying in on politicians and proceeding to hammer them, although not without a certain degree of "nuance and sophistication." From 1974 to 2004, Russell was regularly featured in a series of PBS comedy specials, wryly commenting on current events, sometimes in the form of song. Russell retired from standup 2010 only to begin touring again shortly thereafter.

"Retirement was fine. For two years. I traveled. I wrote books. It was fun," Russell writes in a blog post from 2012. "… I decided to unretire when I heard that members of Congress had been cavorting in the Sea of Galilee [Representative Kevin Yoder of Kansas and others were caught skinny-dipping that year near a Tiberias restaurant]. How can you make that up?"

Russell will continue to lay bare the ugly truths of our world in a special appearance at The Jefferson Educational Society. He is sure to hit on the recent Republican and Democratic national conventions, as well as matters closer to home, in accordance to the belief that "all politics are local." Like the notes of the chromatic scale, there is nothing skipped over.

We may not know yet how the West will be won (or if it is already lost and/or too far gone to save), but Russell's sense of humor rarely fails to win his audiences over. – Matt Swanseger