Save the Date, Save the Viaduct 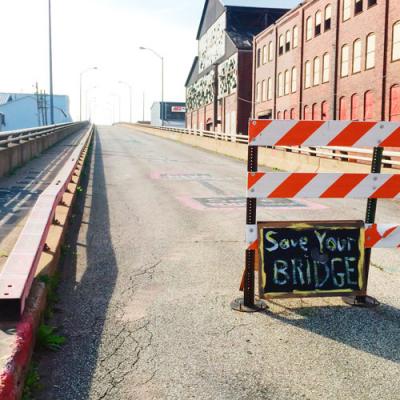 Cyclists and pedestrians who frequent the McBride Viaduct have walked the walk, now it's time to talk the talk for those who would prevent its planned demolition.

The Jefferson Educational Society will host a neutrally-moderated Viaduct Town Hall to discuss the planning, cost, and safety issues surrounding the structure's removal. The project is currently slated to begin in late winter or early spring and conclude this fall. When completed, East Avenue will be sealed off with fenced cul de sacs on either side of the CSX Railroad Lines, which would force foot and bike traffic to redirect onto the bustling Bayfront Connector (although sidewalk/accessibility improvements are planned to that end). This would pose a major inconvenience to the East Side communities affected.

ErieCPR: Connect+Respect President Adam Trott, Vice President Beary Clark, Spokesperson Micheal Keys, NAACP President Gary Horton, and Rev. Charles Mock of the African-American-Concerned-Clergy echo their community's conviction to save the bridge and hope to convince PennDOT and City of Erie leadership of the viaduct's continuing viability. They invite you to join the conversation, because healthy dialogue between government and the governed is the path democracy ought to walk. — Matt Swanseger