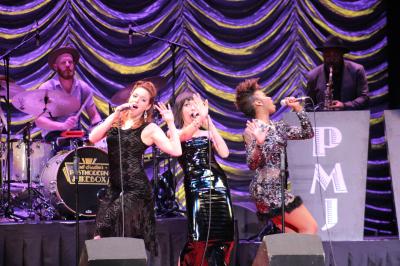 Scott Bradlee's Postmodern Jukebox is returning to Mercyhurst University on their Grand Reopening Tour. This will be the third time they have brought their swing-inspired pop interpretations to the Mary D'Angelo Performing Arts Center. The group made a name for themselves when bandleader Scott Bradlee became a viral pop sensation with a series of YouTube videos where he reworked modern pop songs into vintage styles. Today they have over 5 million followers on YouTube and have played hundreds of sold-out shows across the globe.

The "band" itself is a rotating collective of musicians and vocalists, changing costumes and singers depending on the genre and song that is being performed. Most of the songs are reinterpretations of modern songs as jazz and swing numbers. Postmodern Jukebox isn't limited to just playing jazz and swing, they have taken songs like Daft Punk's "Get Lucky" and turned it into an Irish folk song and turned the theme from the show Friends into an evolution of musical styles throughout the 20th century. They began with the hot jazz of the 1920s and finished in the '90s, where in the video, had a guest appearance by "I'll Be There For You" performers, The Rembrandts. They continue to reimagine pop songs with their most recent release of The Weeknd's 2015 hit "Can't Feel My Face".

Watching these modern classics get a retro spin isn't just toe-tapping, it gives you a different perspective and appreciation for newer pop songs that you may have missed. It brings to light the nuances and talent that it takes to write a pop song and shows that no matter how different the artists that they cover are on the surface, their songs have layers that transcend the genre they are known within. You can expect plenty of dancing, a tight live band, top-notch vocal performances, retro costume changes, and even some amazing tap dancing.
— Larry Wheaton